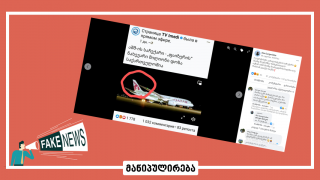 On 25 July 2021, a Facebook user published a screenshot of TV Imedi live which features aircraft of Qatar Airways with the caption: “Gift from the USA – 500,000 doses of Pfizer vaccines arrive in Georgia.” The Qatar Airways logo is highlighted in the photograph. The author of the publication also added a description to the photograph: “Gift from occultist kabbalists. I will mark it anyway for the ‘blind’ and maybe this will let people know what we are dealing with.”

The comments to the publication indicate that Facebook users associate the Qatar Airways logo to Baphomet, a Satanic deity. In addition, the author of the publication says that the vaccine sent by the US is a gift from occultist kabbalists. Aside from the publication being disinformation, it also includes anti-vaxxer and conspiratorial claims which aim to discredit the vaccination process and cultivate mistrust vis-à-vis the vaccines among people.

On 24 July 2021, at 00:40 AM, a Qatar Airways aircraft delivering half a million Pfizer vaccines as a gift from the US government to Georgia, landed at Tbilisi International Airport. The Prime Minister of Georgia, Irakli Gharibashvili; the Minister of Healthcare, Ekaterine Tikaradze, and US Ambassador to Georgia, Kelly Degnan, met the vaccine shipment at the airport. Many TV Channels, including TV Imedi, covered the vaccine’s arrival. After that, some Facebook users started to equate the Qatar Airways logo with the Baphomet.

Baphomet is a heathen idol and a deity which is mentioned in occultist literature. Baphomet was usually depicted as half-human and half-goat or as a goat-headed figure. Clergymen saw Satan in Baphomet and blamed the Knight Templars for heresy. To prove the Knight Templars’ crime, several pieces of idols were found which were in the form of a hybrid of a man and a woman. As a result, heresy charges were pressed against the Grand Master of the Knight Templars, Jacques de Molay, as well as against other members who were all imprisoned for life.

Qatar Airways Company Q.C.S.C., which operates as Qatar Airways, is a Qatari government-owned international airline, headquartered in Doha. The airline was founded on 22 November 1993 and since then its logo has undergone several, albeit not major modifications. The head of an oryx, one species of antelope, has always been a key element of the logo. The populations of these long-horn antelope species, which are alternatively called the white oryx or the Arabian oryx, exist in the steppes and deserts of the Arabian Peninsula. The oryx is the national animal of Qatar. It is associated with speed which is a perfect fit for the Qatar Airways concept.