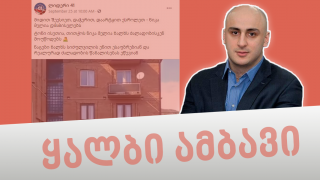 Disinformation: Nika Melia called on his supporters for violence in Dmanisi

According to false information promoted by the Leader 41 Georgian Dream supporter Facebook page, Nika Melia called for violence during a meeting with voters in Dmanisi. As claimed by the aforementioned Facebook page, this is proven by respective video footage where Nika Melia ostensibly urges Dmanisi residents: “Attack, wound, hit, shoot.” According to the Facebook publication: “The tone is that Nika Melia calls on people for violence, Nazis use hate speech whilst addressing people and, in fact, are encouraging violence.” 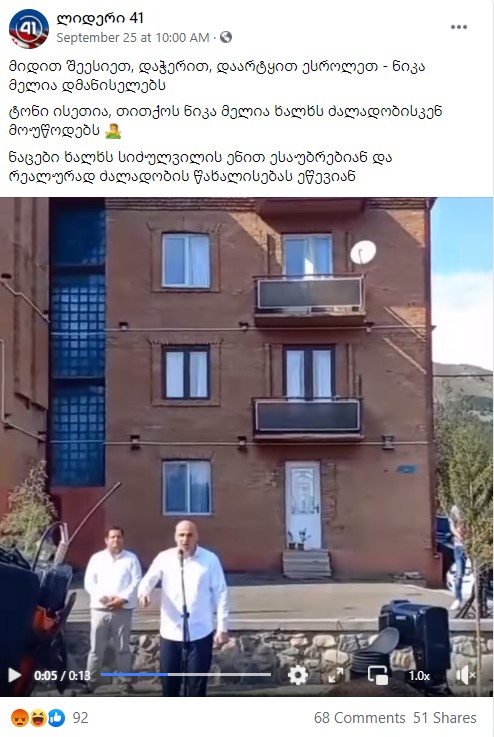 In fact, Nika Melia was not calling on people for violence in Dmanisi which his proven by the full version of the same video footage which the Leader 41 Facebook page used to manipulatively spread the information. The footage of Nika Melia’s speech in Dmanisi is available at Nika Melia’s official Facebook page and the wording is as follows:

“The whole Georgia learned that very cool people live in Dmanisi but the whole world has already learned how vicious and evil Georgia’s ruling regime is whilst Dmanisi and Dmanisi people, with their bare hands, take on most of the fight against this regime. Yesterday was proof that on one side, there were patriots striving for a better future and nothing more. And nothing else has brought you there where the incumbent Mayor of Dmanisi [Giorgi Tatuashvili,] who is a joint candidate of the opposition, and the incumbent MP Kakha Okriashvili were also present. I am confident that the authorities from Tbilisi issued a special order to attack, wound, hit, shoot wherever Kakha and Giorgi are so that Dmanisi people should not feel safe with these people, too, and that these people will be frightened. The opposite has happened. Dmanisi was not broken. Bidzina Ivanishivili, Kobakhidze, Kaladze and Gharibashvili, hear – Georgia is not broken. You are bullies, sonderkommandos and you resort to the most disgustingly immoral methods of violence.”

Nika Melia made this statement after two opposition supporters were wounded in the face during the election rally of the Dmanisi mayoral candidate.

Therefore, the footage disseminated by Leader 41 Facebook page is manipulative and Nika Melia’s speech in the footage is edited in a manner to make impression that he calls on voters for violence which is a LIE.