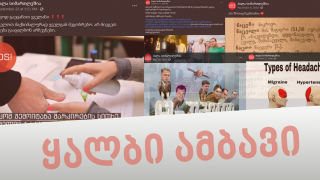 False Information About Electoral Ink is Disseminated Through Social Networks

On 22 September 2021, Dzala Simartleshia Facebook page disseminated false information about the upcoming elections. According to the Facebook publication, the Central Election Commission purchased such electoral ink which disappears in one hour and plans to mark the ruling party supporters with that ink.

On 27 September 2021, the Central Election Commission responded to that publication on its own Facebook page and stated that the information was not true.

Of note is that one and the same Facebook users coordinately re-posted (link 1, link 2, link 3 and link 4) the aforementioned publication both in the Georgian Dream and the United National Movement supporting groups. Among those Facebook users who left comments on these publications are those who also coordinately promoted disinformation from the We are the real CEC fake page (see FactCheck’s article). Another common characteristic of these two publications about the Central Election Commission is that the number of shares for these publications is much higher as compared to other types of interactions (such as likes or comments).

Of note is that in the previous years, including during the 2020 parliamentary elections, the aforementioned Dzala Simartleshia Facebook page was mostly reposting publications intended to smear the opposition and the NGO sector whilst it started to promote false information vis-à-vis the Central Election Commission in September 2021.

On 28 September 2021, the International Society for Free Elections and Democracy published a report about a manipulative campaign on Facebook vis-à-vis election processes. According to the ISFED’s report, anonymous pages and fake accounts have been activated and/or created on Facebook, posting harmful information and sharing it in groups in a coordinated manner in order to thwart election processes. The ISFED also speaks about double information operations: “Malicious actors carry out a double information operation. On the one hand, these pages spread discrediting posts about observation organisations, opposition parties and media outlets that are critical of the authorities which is mainly followed by their criticism of the election administration. The purpose of the posts is to destructively portray all of those who criticise the election administration. Suspicious accounts active on these pages share these posts in groups with thousands of members and try to reinforce the narrative with aggressive and offensive comments. On the other hand, the same coordinated pages and non-authentic accounts are involved in spreading false information about the CEC.”