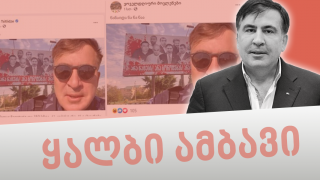 Edited Photograph of Mikheil Saakashvili is Disseminated Through Social Networks

Photographs of the former President of Georgia, Mikheil Saakashvili, were disseminated through Facebook. In these photographs, Mr Saakashvili stands in front of the banner – “No to the Nazis! No to evil! No to betrayal!” The photograph gives the impression that he is standing in Zugdidi just in front of this banner. In fact, the photograph is a result of photo-editing.

The image of Mikheil Saakashvili promoted by social media is, in fact, a result of photo-manipulation. Mr Saakashvili’s photograph is a screenshot taken from the video of 21 August 2021 which was posted by the former president himself on his own Facebook page. In this video, Mr Saakashvili speaks about the epidemiological situation in Georgia.

The dissemination of such publications about Mikheil Saakashvili was caused by the publication posted on his own Facebook page on 1 October 2021 where the former Georgian president informed the Georgian people about his return to the country.

The Ministry of Internal Affairs of Georgia does not confirm the arrival of the former President Mikheil Saakashvili to Georgia. As stated by the Deputy Minister of Internal Affairs, Aleksandre Darakhvelidze, they had active communication with the Ukrainian side and were informed that Mr Saakashvili had not crossed Ukraine’s border. United National Members, on the contrary, confirm that Mikheil Saakashvili is indeed in Georgia.