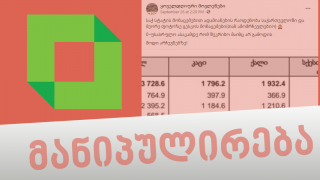 Manipulated Publication About Voter List is Disseminated Through Social Networks

The Koveldghiuri Movlenebi Facebook page posted a manipulative publication about voter lists through Facebook where the number of voters according to the Central Election Commission (CEC) is compared to the population of Georgia according to the National Statistics Office of Georgia. The publication reads: “If one adds everyone from 0 to an infinite age, there is not going to be such a figure (the number of voters which the CEC says is true).”

A comparison of the Central Election Commission and the National Statistics Office of Georgia’s figures is inappropriate since these are two different indicators. The statistics of the National Statistics Office of Georgia includes people (regardless their nationality) living on the territory controlled by Georgia whilst the CEC voter list includes every citizen with the right to vote, including Georgian nationals living abroad and in the occupied territories.

According to the 2014 universal public census conducted by the National Statistics Office of Georgia, the country’s population is nearly 3.7 million. Changes in the number of the population in the coming years are stipulated by two major factors: natural growth (the difference between fertility and mortality) and net migration (the difference between immigrants and emigrants). The data of the National Statistics Office of Georgia reflect the total number of individuals living on Georgia-controlled territory, including both Georgian and foreign nationals. Those Georgian nationals living abroad or in the occupied territories are not included in these statistics. Therefore, the data of the National Statistics Office of Georgia; that is, total amount of people living in Georgia and the voter list; that is, the number of voting-age Georgian nationals, are two different indicators and are not comparable with each other.

According to Article 24 of the Constitution of Georgia, Georgian nationals have the right to vote from the age of 18 years.

According to the CEC figures, the total number of voters for the 2 October 2021 elections is 3,497,345. Although polling stations abroad will not open for the local self-government elections and emigrants cannot actually vote, they still remain in the voting lists.

The CEC further clarified to FactCheck that on top of voting-age Georgian nationals living in Georgia, voter lists also include voting-age people abroad, voting-age people residing in the occupied territories, people without an address (registered without their address) and those who were removed from their place of registration.