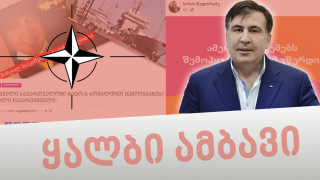 Disinformation: Saakashvili was Brought Back to Georgia by NATO Warship

Some pro-Russian and United National Movement supporting sources report in Georgian social media that Mikheil Saakashvili was brought back to Georgia by a NATO warship. In particular, they claim that it was either one of the vessels of the Standing NATO Mine Countermeasures Group 2 which arrived in Batumi on 28 September 2021 or/and American ship (for instance, see link 1, link 2, link 3 and link 4).

Regardless of the presence of NATO warships in Batumi port, of important note is that they are not in Batumi to bring Mikheil Saakashvili but they are hosted by the Coast Guard Department of the Border Police of the Georgian Ministry of Internal Affairs: “Within the framework of the visit, the Georgian Coast Guard Department and NATO Naval Unit ships will conduct joint exercises in the Black Sea. The purpose of the exercise is to increase the interoperability of the Georgian and NATO naval forces and strengthen our country's defence capabilities.”

Of additional note is that: “The Coast Guard Department Boarding Teams will also undergo the second stage of the Second Level Assessment [NEL-2], the final phase of the four-year assessment process” and “NATO Naval Units regularly visit Georgian ports which is one of the tangible results of NATO-Georgia cooperation in terms of strengthening Black Sea security which is manifested by the fact that it is the second time NATO ships have visited Georgia in 2021.” This confirms that the entrance of NATO warships in Batumi port was planned and was scheduled within the scope of close NATO-Georgia partner relations. Therefore, the visit of the Standing NATO Mine Countermeasures Group 2 has nothing to do with Mikheil Saakashvili’s alleged return to Georgia and the widely promoted claim that Mr Saakashvili was brought back to Georgia by NATO or US military vessels is a conspiracy theory which has no solid ground and is fake news.