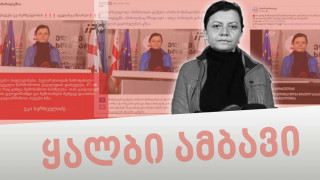 On 2 October 2021, the Dzala Ertobashia Facebook page posted a photograph of Eka Kherkheulidze, a United National Movement member, with the following caption: “Ballot papers were printed on paper of unknown origin imported from Belarus and whatever you circle there except for 41 will be deleted. Take antiperspirant deodorants with you and spray it on the ballot paper after making a circle to rescue your vote.” This publication of the Dzala Ertobashia Facebook page also includes the log of the InterPressNews (IPN) news agency which leaves readers under the impression that the information was reported by the IPN.

In fact, this photograph, which is disseminated with an InterPressNews visual image, is a result of photo-editing and the quote it features is fake since Eka Kherkheulidze has never made such a statement.

Eka Kherkheulidze has not called for people to use such tactics during election day. No such statement under her name can be found on the IPN website or on the Facebook page as well as in any other open sources. Therefore, Dzala Ertobashia Facebook page has fabricated her quote.

Eka Kherkheulidze’s statement where she responded to the arrest of the third President of Georgia, Mikheil Saakashvili, was published both on the IPN’s website and the Facebook page on 1 October 2021. The statement was as follows: “Eka Kherkheulidze: Arrest for Misha is no hindrance as he was ready for that, too. Now, for him prison is the way of continuing his fight.”

Of note is that the Dzala Simartleshia Facebook page has been mostly focused on discrediting the opposition and the NGO sector in the last years, including in the run-up to the 2020 parliamentary elections.