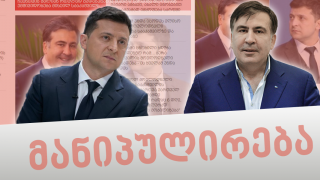 In fact, the first and second paragraphs of the article have no connection with each other. The quotation in the first part of the article belongs to Sergii Nykyforov, Spokesperson for the President of Ukraine. On 1 October 2021, he made a publication on Facebook where he stated that Ukraine carefully monitors the arrest of Mikheil Saakashvili, the Head of the Executive Committee of the National Council of Reforms of Ukraine, and that President Zelensky is concerned about developments in Georgia.

This statement is accurate in the article of Publisher.ge, although the second part of the article is not about the 1 October 2021 developments. The quote in the second part of the article belongs to Mikheil Saakashvili who made the statement on 28 August 2020. According to Tabula.ge, Mikheil Saakashvili made a publication on his own Facebook page on 27 August 2020, saying that he is coming back to Georgia. The next day, he said that his Ukrainian friends are mourning his departure after his statement on his planned return to Georgia.

“There have been many sad comments today about my statement on Georgia. Some of my Ukrainian friends mourn my ‘farewell’ to Ukraine. I would like to say to them: ‘Do not let yourselves down! We are going to fight both in Georgia and Ukraine! We will be victorious both here and there! For me, the fates of our two countries are inseparable. For me, this a one fight. This will be one joint victory!’”

Publisher.ge manipulatively reports the reaction of Ukraine over Mikheil Saakashvili’s arrest and makes an impression that the quote in the headline belongs to President Zelensky. In fact, the quote, “It is very hard for us to endure and the whole of Ukraine mourns and says good-bye to Mikheil Saakashvili,” is a modified version of Mr Saakashvili’s own statement which he made as early as 28 August 2020.

The article posted by Publisher.ge is disseminated and promoted in parallel by Facebook user Koba Vasadze in different Facebook groups under the names of Mikheil Saakashvili, the United National Movement and other UNM-affiliated individuals.