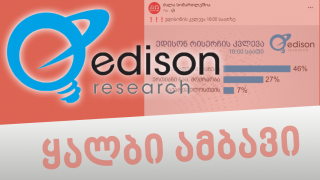 The Dzala Simartleshia (Power is in Truth) Facebook page published a photograph (see below) with the following caption: Edison’s Polls for 16:00.

In fact, Edison Research has not published election polls for 16:00. According to the information of Formula TV which commissioned Edison Research polls, interviewers will complete an evening survey and exit-poll results will be aired on Formula TV at 20:00 sharp.

Of note is that the Dzala Simartleshia Facebook page in the last years, including in the run-up of the 2020 parliamentary elections, was mostly preoccupied with discrediting the opposition and the NGO sector.