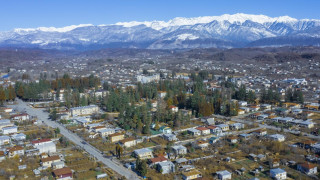 Who Promises What to Tsalenjikha?

As we know, the Tsalenjikha municipality is the only one where the candidate from the opposition, the United National Movement’s Giorgi Kharchilava, won in the run-off of the local self-government election

As we know, the Tsalenjikha municipality is the only one where the candidate from the opposition, the United National Movement’s Giorgi Kharchilava, won in the run-off of the local self-government election. Given this fact, Tsalenjikha came under a particular public spotlight.

The idea itself is certainly good. However, below we analyse the extent to which the Law on the Budget of Self-Governing Units and the Code of Self-Governance allow this to happen.

The budget receipts of a local self-governing unit’s budget consist of its own receipts and transferred funds. Local taxes and duties, equalisation payments and other receipts intended for a self-governing unit as envisioned by Georgian legislation constitute its own receipts. However, special and targeted transfers and other receipts as envisioned by Georgian legislation constitute transferred funds.

Local self-government units are allowed to spend their own receipts at their own discretion (Chapter II, Article 9).

The major source of budget revenues for the local self-government unit in Georgia was an equalisation payment received from the state budget. In addition to the transfer, other sources of a municipality’s revenues are local taxes and duties.

Currently, there are six taxes in Georgia. Of these taxes, only property tax is a local one whilst the rest comprising profit tax, income tax, VAT, excise tax and import tax are national taxes.

Therefore, as mentioned earlier, the only local tax is a property tax which is 100% funnelled to a municipality budget. However, some portion of income tax; in particular, taxes from revenues from activities of entrepreneur physical persons, has also remained in the local self-government’s budget since 2018. Nevertheless, support in the form of the equalisation payment still remains as a major source of municipality income. At the same time, leaving some portion of income tax in the local self-governing unit’s budget has not led to a growth of total budget revenues since the amount of the equalisation payment for each and every municipality was determined in accordance with their own revenues and the volume of the equalisation transfer was shrinking proportionally to the growth of a municipality’s own income.

If a municipality’s revenues will increase from local taxes, duties and other incomes, the revenue payable to the municipality from VAT-generated income will not decrease. However, in the case of the equalisation payment, this would have resulted in cutting the financial support from the central budget. This implies that if a self-governing unit’s revenues increase, it leads to the growth of the self-governing unit’s budget as well. However, as mentioned earlier, only property tax remains in the local budget whilst other types of taxes, such as profit tax and income tax, are accumulated in the central budget.

We discussed the legal ways to increase a local budget. However, FactCheck affirms a strong solidarity to any activity in Tsalenjikha with even one additional job being a positive gain for the locals living in poverty. Furthermore, 33.3% of Tsalenjikha residents (7,766 people – 2,098 families) receive subsistence assistance and 12,235 people are registered in a database for socially vulnerable people as of October 2021.

This year, Tsalenjikha’s budget is GEL 16,346,300 of which GEL 8,904,800 comprise its own revenues whilst the remainder is in the form of transfers and grants allocated from the state budget.

The Prime Minister of Georgia, speaking at a government session, congratulated elected mayors, including the mayor of Tsalenjikha and stated: “I would like to wish every success to the mayor of Tsalenjikha – he is the only candidate from the opposition who deservedly won the elections and I would like to say to him that the entire central government will be ready to have cooperation with him in a constructive manner.” Prior to the run-offs of the self-government elections, the Prime Minister stated that the ruling party was going to hinder the opposition mayors in their activities.