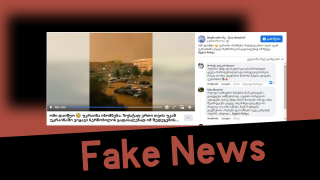 A 33-second long piece of footage which shows how the sky is lit up in the dark followed by sound of explosions is being circulated in Facebook. Social network users claimed that this footage shows a 2022 bombing of Ukraine with Mariupol often being named as the target. In fact, this piece of footage shows a lightning and thunder strike hitting an energy station in Russia in 2021.

Of note is that the last time this piece of footage was posted on Facebook on 29 January 2022 prior to the launch of hostilities, its description says: “thunder striking on power station.”

As a result of the verification of weather forecasts, it was found that the weather in Volzhsk was cloudy with thunderstorms on 28 June 2021. The Telegram channel of the local Volzhskaya Pravda newspaper posted similar pieces of footage recorded by anonymous subscribers who were able to capture the thunderstorm.

Therefore, this specific piece of footage dated 28 June 2021 shows a thunderstorm in the Russian town of Volzhsk not an assault against a Ukrainian city.