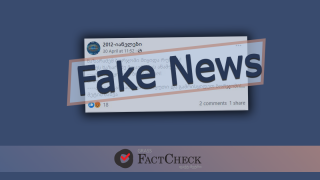 According to the statement released by IDS Borjomi, the company is indefinitely suspending its operations from 29 April 2022 owing to the situation on the international market, Russia’s war against Ukraine, frozen accounts and owner under sanctions. IDS Borjomi which produces Borjomi, Likani, Mitarbi and Bakuriani waters suspended operations of two Borjomi-based bottling factories.

Mamuka Khazaradze and Badri Japaridze released a joint statement to respond to the information about the Borjomi company. The statement posted on Mamuka Khazaradze’s official Facebook page reads: “In 2002, the Salford Investment Fund, which was founded by Badri Patarkatsishvili and his partners, acquired the company from the initial investors. In 2013, Salford, which was also represented by Irakli Rukhadze – current manager of TV Imedi – sold Borjomi Holding’s controlling package of share to Alfa Capital, a Russian financial group.”

The statement by Badri Patarkatsishvili’s widow, Ina Gudavadze, released in 2013 also confirms the fact that the Patarkatsishvili family sold the company to the Russian investor.

Therefore, the claim that it was Mamuka Khazaradze who sold the IDS Borjomi company to the Russian shareholder is not true.

According to the study carried out by Netgazeti, Borjomi has had three investors at different times since Georgia’s independence.

As stated by the Georgian businessman and founder of TBC Bank, Mamuka Khazaradze, he sold the company in 2002 and the asset management was transferred to Salford Capital Partners, founded by Badri Patarkatsishvili and Boris Berezovskiy.

In 2013, the Patarkatsishvili family sold 60% of the shares of the Borjomi company to the Alfa Group, owned by a Russian oligarch, Mikhail Friedman, which is also confirmed by the statement of Badri Patarkatsishvili’s widow, Ina Gudavadze, released in 2013.

As a matter of fact, the main shareholders of the Alfa Group are oligarchs with close ties to Vladimir Putin – Mikhail Friedman, Aleksey Kuzmichev, German Khan and Peter Aven who were sanctioned after Russia invaded Ukraine and their bank accounts were frozen.

At the same time, after IDS Borjomi’s statement that the company suspends operations in Georgia, IDS Borjomi’s bonds lost 40% of their value on the Moscow Stock Exchange.

On top of factories in Georgia, INDS Borjomi International has six additional factories in Ukraine and Russia. Apart from the Borjomi, Likani, Mitarbi and Bakuriani brands, it also owns famous Ukrainian brands Моршинська, Миргородська and Трускавецька as well as well-known Russian brands Святой источник and Эдельвейс.

According to the survey of Transparency International – Georgia, a subsidiary of the DS Borjomi Beverages Company LLC was registered in Georgia in 1997. Until 2009, it was called Georgian Glass and Mineral Water Co. NV. The branch has a license to use the Borjomi gorge and other water sources in Georgia. The IDS Borjomi Beverages Company has off-shore registration in Curacao, the Antilles and the Netherlands. The director of the company is Vladimir Ashurov, a Russian national, whilst the beneficial owners of the company remain unknown. Since 2021, the former Minister of Finance of Georgia, Ivane Machavariani, has been appointed as the director of the company’s Georgian branch.