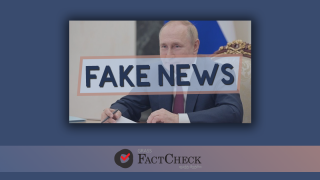 Russian Disinformation Against Ukraine and Other Western Countries

Drawing on many other false claims, Russian propaganda is also based on a narrative that the West and Ukraine are waging an information war against Russia. According to pro-Kremlin sources, the West launched a disinformation campaign against Russia as early as in 2014. They claim that the aim of this well-planned information warfare is to cultivate confusion and pessimism among Russian nationals and instil doubts about the formidability of the Russian army and the Russian state.

In fact, it is Russia and not the West which wages information warfare. Russia’s actions of blaming others for what it is doing are well-known as a practice. The Kremlin actively used disinformation campaigns and cyber-attacks to interfere in the political processes of the other countries, something which is proven by many facts.

In 2014, Moscow began targeting countries beyond the Eastern Bloc and expanded its campaign westwards. Far right French candidate Marine Le Pen received an almost USD 13 million loan from the Kremlin to finance her party’s 2014 campaigns. In the same year, Russian hackers launched a cyberattack against the Polish electoral commission’s website.

In 2015, the German Parliament was the victim of a cyberattack linked to Russia aimed at collecting documents ahead of the federal elections. In Scotland, pro-Russian accounts on social media spread stories claiming that voter fraud occurred during the country’s independence referendum. Ahead of the Finnish parliamentary elections, Russian entities created fake social media accounts posing as official parliamentary accounts. At first, these accounts posted mainstream political content and amassed thousands of followers. However, as the election neared the accounts turned to promoting misinformation and sowing confusion among the electorate.

Russia also carried out a campaign against Angela Merkel’s government through bots and trolls exploiting issues of migration. In addition, the German-based News-Front Deutsch, RT Deutsch and Sputnik pro-Russian outlets pushed Kremlin narratives and fake news stories designed to boost right-wing talking points. Throughout 2017 and 2018, Russian-sponsored disinformation through state media and fake social media accounts was targeting elections in Italy, the Netherlands, Ukraine and Bulgaria as well as referendums in Spain and North Macedonia.

Simultaneously with interfering in the domestic politics of other countries through disinformation and cyber-attacks, Russia actively wages information warfare both against the international community and its own citizens. As mentioned earlier, Russia blames the West for using these methods and brings groundless counter-allegations against specific facts. The situation is similar vis-à-vis Russia’s ongoing war against Ukraine which it started with “pretexts” based on completely disinformation-shaped narratives.

There is an emerging consensus in the West that Russia has already lost the information war. In his interview with Politico, Jānis Sārts, Director of the NATO Strategic Communications Centre of Excellence, stated that Russia’s disinformation campaign and propaganda was unsuccessful within the context of the war in Ukraine. In addition, the former Latvian defence official added that roughly 90% of Moscow's propaganda had shifted to focus on a domestic, not international, audience according to Politico: "Now, they are either labelling everything that is coming out of Ukraine as fake or using the same material from Ukraine but flipping the narrative. It's not Russians but Ukrainians."

Russia’s attempt to justify its expansionist aims vis-à-vis Ukraine through disinformation and propaganda started as early as in 2014. Then as well as in 2022, the military aggression against Ukraine was based on complete disinformation which Russia used to justify its actions in the eyes of the international community and its own citizens. In 2014, the pro-Kremlin media portrayed an invented picture that Ukraine was ruled by fascist, anti-Semitic and extremist groups. The “reason” which Putin provided for launching a full-scale war in Ukraine which he continues to refer as “special operation” was similar: “Protecting the population from genocide and achieving Ukraine’s demilitarisation and denazification” as well as the “protection of those people who were abused and subject to genocide for eight years by Kyiv’s regime.”

However, there is a clear consensus among the international community now as it was back in 2014 – Ukraine has nothing to do with a fascist and a Nazi state contrary to Russian claims and it did not commit genocide against its own people. See FactCheck’s articles for baselessness of these allegations in detail (link 1, link 2, link 3).

One of the disinformation narratives which Russia has already used against Ukraine is about biological laboratories in Ukraine. After a few weeks since launching the invasion of Ukraine, Russian officials, state media and social media accounts actively claimed that evidence has been found during the “special military operation” that Ukraine was producing biological weapons in US-funded laboratories and the US erased its trace in a hurry. Traditionally, Russia has not presented evidence to corroborate this accusation, although convinced its own population of the necessity to wage and continue war. See FactCheck’s articles for more details (link 1, link 2).

Russian Disinformation Aims to Demoralise the Ukrainian People and the Army

Since 24 February 2022 when Russia invaded Ukraine, the Kremlin has been promoting disinformation that Ukraine’s military is laying down its arms at different frontlines and is surrendering en masse. Russian media also promotes disinformation that Ukraine’s military does not offer resistance in the face of the Kremlin’s occupier forces. In fact, Ukraine uses its right to self-defence as guaranteed by Article 51 of the UN’s charter and has been resisting the Russian army for more than two months.

At the beginning of war, the Russian media also disseminated fake news that battles in Ukrainian cities were the “hysteria of the Western media” and in fact nothing was happening in those cities. The falsehood of this information was easily confirmed by photo and video materials. Another item of disinformation which Russia widely promoted at the beginning of war aimed to discredit the Government of Ukraine. Russian media was writing that Volodymyr Zelensky and his associated team fled Kyiv on 25 February and escaped to Western Ukraine. In response to these items of fake news, Zelensky published a video address on his official page on 26 February which showed that he had not left Kyiv and was not going to do so. Zelensky’s presence in Kyiv was confirmed multiple times in the future as well – he hosted many representatives of Western countries and video and photo evidence of these meetings is publicly available.

Promoting this disinformation at the beginning of war aimed to demoralise and disorient both the Ukrainian people and the Ukrainian army. See FactCheck’s articles for more information (link 1, link 2, link 3, link 4, link 5).

Russia’s initial aim was to liberate the entire Ukraine from “Nazi forces,” take Kyiv and install a puppet government. However, it decided to launch another wave of disinformation since it failed to achieve any of these objectives and acquire legitimacy from the international community for its actions.

The most active part of Russia’s disinformation campaign is aimed at overshadowing its crimes committed during the war. After Russia failed to quickly achieve its desired outcome, it started to attack civilian facilities, although every fact which really shows its crimes is fed to its population as Ukraine’s fault. Despite photo and video evidence about possible war crimes committed by Russia in Ukrainian cities, the Kremlin constantly reiterates that the photos/videos were staged or the scenes are a result of the Ukrainian army’s actions. The evidence obtained by the international community, government or non-government international organisations, investigative journalists and other sources prove that Russia is attacking civilian facilities and, therefore, its actions are possible war crimes. See FactCheck’s articles (link 1, link 2, link 3, link 4, link 5, link 6, link 7, link 8).

Given the aforementioned facts, Russia’s narrative that the West and Ukraine are waging information warfare against Russia is fake. In fact, this is Russia and not the Western states which wages information warfare for different aims against its own people, neighbour countries and Western nations.