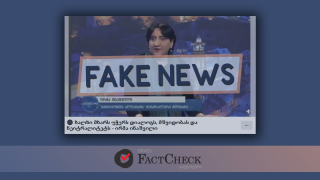 The Obiektivi media union, affiliated with the Alliance of Patriots political (AoP) party, disseminated another piece of disinformation about Georgia’s neutral status (link 1, link 2). One of the leaders of the AoP, Irma Inashvili, claims that neutrality is the safest solution for Georgia. Ms Inashvili also argues that many people support Georgia’s neutrality which is confirmed by street surveys. She stressed that this is the real position of Georgia. A similar opinion is voiced in other TV programmes where journalists try to position several people in such a way that they are representative of the position of the whole of Georgia. Other AoP-related individuals are promoting disinformation through Facebook that over 70% of Georgia’s population is in favour of military neutrality.

Recent public opinion polls prove that most of the Georgian population is in favour of EU integration. The National Democratic Institute (NDI), an impartial and authoritative organisation, published a public opinion survey on 21 April 2022. The survey includes the results of telephone interviews conducted for nearly two weeks before Russia’s invasion of Ukraine (3-15 February) and two weeks after the invasion (9-20 March). Respondents were selected through a simple random sampling using the random-digit-dial method. The average margin of error for February and March surveys are +/-1.8% and +/-1.6%, respectively. The poll is representative of the entire Georgian population (excluding the occupied territories). 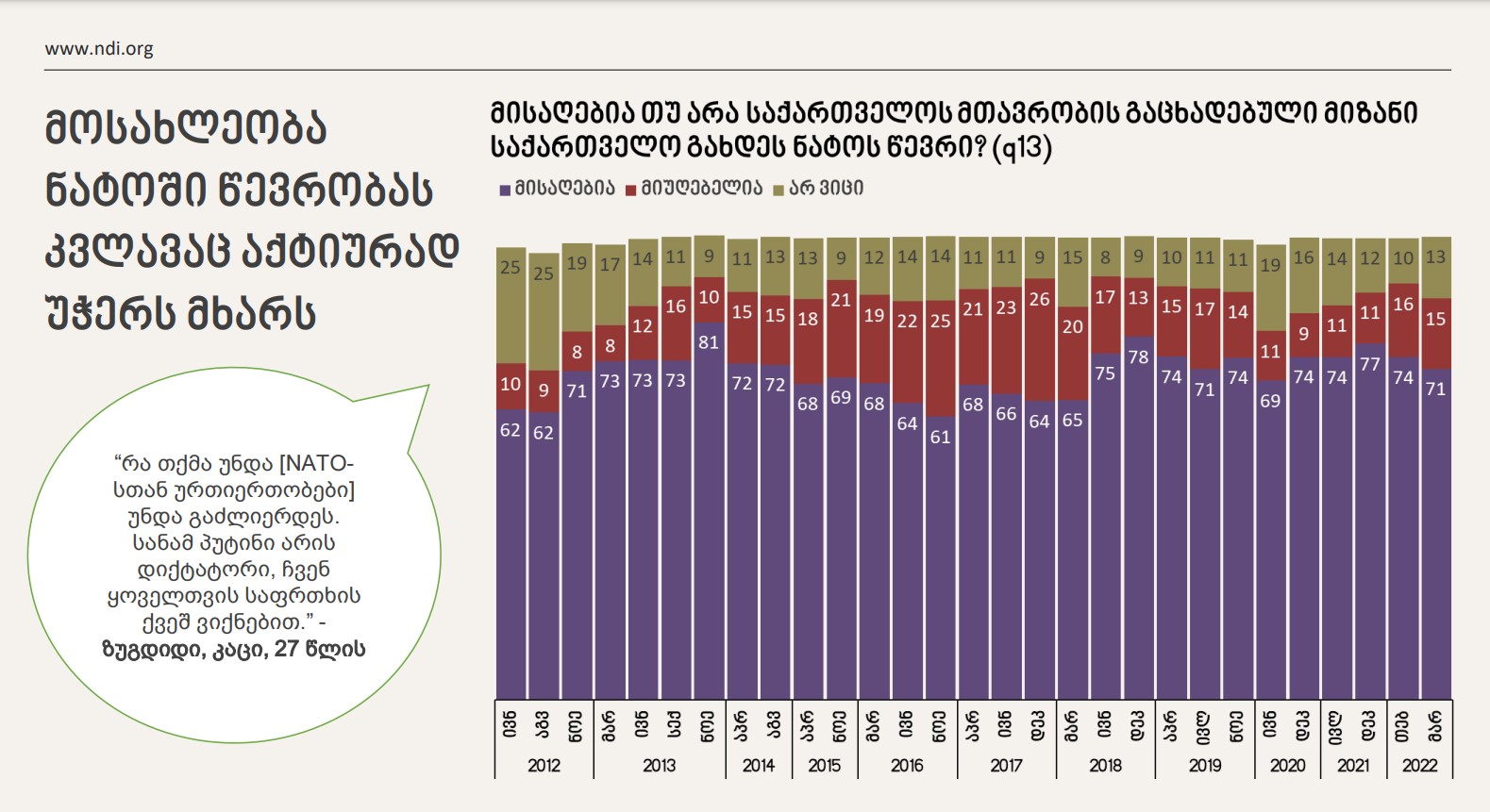 The International Republican Institute (IRI), another influential organisation, published a survey on 27 April 2022 which reflects the results of interviews conducted in Georgia from 4 to 24 March 2022. The survey on the IRI’s behalf was coordinated by Dr Rasa Alisauskiene whilst the fieldwork was carried out by the Institute of Polling & Marketing. Data were collected through face-to-face interviews and the margin of error is +/-2.5%. 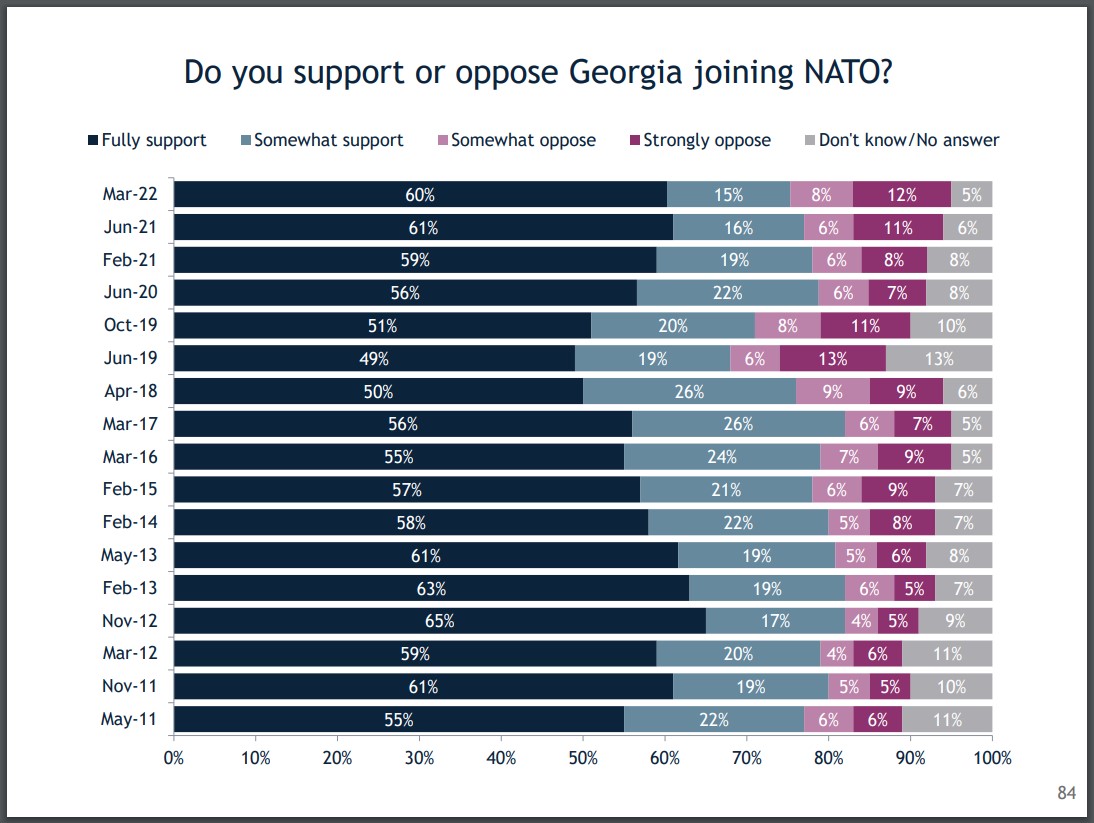 Flaws and Invalidity of the AoP’s Survey

Given the AoP members’ comments made about the survey’s methodology, it was evident that the survey has a number of flaws and cannot be considered as representative. This includes inaccuracies in sampling principles, breaching survey ethics, disregard for the interests of those interviewed and the wording of the questions.

In an interview with On.ge, an AoP member stated that no specific age, sex or demographic category was selected for the survey and they were asking “everyone” whose telephone number was accessible in the web-based telephone number database. Some of these databases are outdated and the names of previous owners are indicated whereas the actual owners are different. In addition, not every Georgian national’s telephone number can be found in those databases.

On top of that, the printed version of the questionnaire, which the AoP disseminated, warns respondents that their answers will be used and processed. They require filling out a field for personal information followed by three major questions: 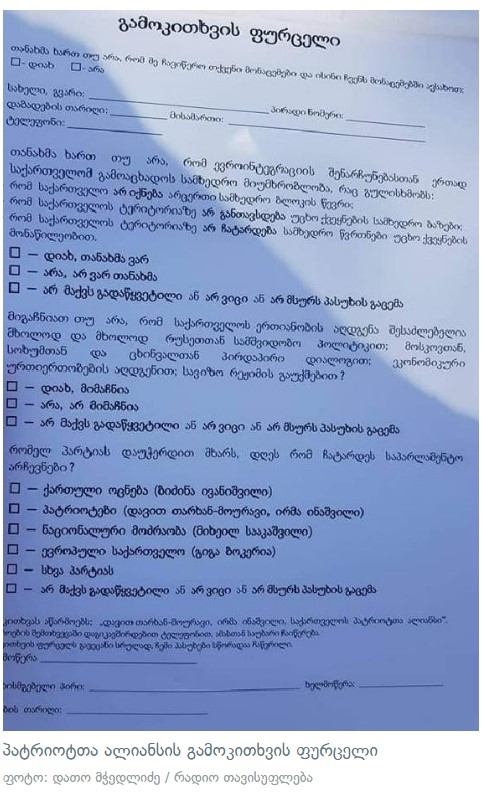 However, the situation is drastically different vis-à-vis the telephone interviews. Some respondents who took part in the survey told On.ge that they were not asked for a personal ID number, although in some cases the interviewers knew the respondent’s name and surname in advance. In addition, the question which is about military non-alignment in the printed version of the questionnaire is transformed into “military neutrality” or “army independence” in the telephone interviews. Furthermore, some of the respondents were given only two options for the answer and were not informed about the possibility of the “do not know” and “not decided” options.

See On.ge’s article about these and some other flaws.

What Does Neutral Status Mean for Georgia?

Neutrality is a special international-legal status which is recognised by other countries. When declaring permanent neutrality, a country assumes the obligation not to participate in possible armed conflicts between other nations, it does not join military alliances and blocs and it does not deploy foreign troops and military bases on its territory.

In order for a country to adopt a neutral status, it should meet the following major conditions:

a) It should not be a matter of significant geopolitical interest for the other states and be located in a geographically “marginal area.”

b) It should be able to defend itself.

c) It should be distanced from any type of expansionism.

d) It should have a high level of internal cohesion.

Given these pre-conditions, it is logical that the adoption of neutral status for Georgia under these circumstanced would be impossible, in the first place, as well as pernicious.

The historical experience of both Georgia and other countries has proven many times the imprudence of the AoP’s initiative to abandon NATO aspirations and declare neutrality. Neutrality/non-alignment or the so-called non-bloc status has never been a hindrance for Russia to aggressively pursue its own foreign policy interests. Therefore, blocking Georgia’s NATO integration is not an overarching goal for Russia but an instrument to achieve the main objective. Russia’s most important task is to bring the neighbours, including Georgia, back to its sphere of influence, referred to as the so-called “near abroad.” It is precisely to this end that Russia seeks to hinder their NATO/EU membership and democratic development.

NATO-Georgia cooperation started in 1992 when Georgia joined the North-Atlantic Cooperation Council. Georgia’s involvement in NATO’s Planning and Review Process since 1999 can be considered as a deepening of cooperation for which Georgia was awarded its first practical instrument in the form of an armed forces management system. However, Georgia expressed the wish to join NATO for the first time in 2002 at the NATO Prague Summit. Georgia’s NATO integration process starts from that date.

However, the Russian Federation started to infringe upon Georgia’s sovereignty and disrespect its territorial integrity in 1991-1992, simultaneously with the outbreak of conflicts in the Tskhinvali region and Abkhazia; that is, long before Georgia officially expressed its desire to join NATO. Despite these two conflicts, the Government in Georgia still decided to join the Russian-managed Commonwealth of Independent States (CIS) in 1993 and the Collective Security Treaty Organisation (CSTO) later. Both of these organisations were founded in order to champion Russia’s interests whilst Georgia’s main goal in holding memberships there was to restore its territorial integrity and keep its sovereignty. Nevertheless, Russia started to issue Russian passports in Abkhazia and South Ossetia in 2000. In 2000-2002 after the start of the second Chechen war, Georgia’s territory was bombed multiple times. This proves that even if Georgia had never brought NATO integration to the forefront of its political agenda, Russia would still have continued hostile actions in order to undermine Georgia’s stability.

If we take a look at an even earlier period, we will find out that Russia’s politics were also not much different then. As early as during World War One, Georgia’s Act of Independence on 26 May 1918 was very specific in regard to conflicts: “In international warfighting, Georgia is a permanently neutral state.” On 7 May 1920, Russia recognised Georgia’s independence whilst Georgia, in turn, pledged that it would not allow armed forces hostile to Russia on its territory. However, neither neutrality nor the agreement to disallow foreign troops on Georgian territory hindered Russia from occupying Georgia in February-March 1921.

Therefore, the claim of the AoP and other party-related individuals that the majority of the Georgian population (70% according to some sources) supports neutrality and refuses joining military blocs is fake.