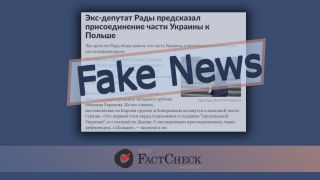 A former member of Ukraine’s Verkhovna Rada, Ilya Kiva, who requested political asylum in Russia and seeks to obtain Russian citizenship, wrote on his Telegram channel: “The formation of the Western line of Ukraine’s defence has been started. It was decided that weaponry and ammunition supplied from Europe will remain in Ukraine’s western regions. This is the first part before secession happens and a pro-Western Ukraine is proclaimed with Lviv as its capital city. This will be followed by joining Poland through a referendum.”

This information was disseminated by lenta.ru and it was reposted in other online media and social networks (for instance, see link 1, link 2, link 3, link 4, link 5, link 6, etc.).

These types of disinformation pieces, claiming that Poland is intent to annex Ukraine’s west, have been promoted since the very beginning of Russia’s invasion of Ukraine. On 29 April 2022, the spokesperson of Poland’s Ministry of Internal Affairs denied information that Warsaw is working on plan to annex western Ukraine. The Polish side released this statement in response to claims of the Head of Russia’s Foreign Intelligence Service, Sergey Narishkin, who insisted that the USA and Poland are getting prepared for Warsaw establishing military and political control over its historic territories in Ukraine. Spokesperson of the Minister-Special Services Coordinator, Stanislav Zarin, also responded to Sergey Narishkin. According to Mr Zarin, Narishkin continues info-ops against Poland and the USA and promotes false claims, adding that lies about a looming Polish annexation of western Ukraine have been ongoing for years and this campaign became particularly robust after Russia’s invasion of Ukraine.

In addition, the Government of Poland, in an information piece published on its website, says that it is the Kremlin’s propaganda lies that Poland has hostile attitudes vis-à-vis Ukraine and has an intention to occupy Ukraine’s western territories.

Of interest is that in 2014, the late Russian Duma MP, Vladimir Zhirinovskyi, sent a letter to Poland, Hungary and Romania about partitioning Ukraine’s territory. However, the Polish Ministry of Foreign Affairs has called his letter “ridiculous.”

In regard to reports about storing weapons supplied from Europe in western Ukraine and the setting of defensive lines there, this information has not been confirmed by any sources. Naturally, Ukraine receives weaponry from Europe, precisely from western regions, because Poland and Slovakia share land borders with Ukraine’s western regions. However, there is no information that weaponry is left in the western regions and is not being sent to Donbas where the fiercest battles are taking place. On the contrary, however, there is open source reporting that Ukraine uses weapons supplied from Europe in the country’s eastern region. For instance, a piece of footage was released on 13 April 2022 which shows how Ukraine’s Armed Forces are already using a Czech-supplied 152mm self-propelled howitzer (the footage shows how the howitzer fires and we can possibly assume that it is deployed in a combat area since there are no ground battles in western Ukraine). In addition, another piece of footage was released on 23 April 2023 showing how T-72 MB tanks are rolling at the frontlines in the Luhansk region. On 2 May 2022, there was another piece of footage featuring Polish-supplied T-72M1 and T-72M1R MB tanks in action and showing how they are advancing at the frontline in Donbas. On 5 May 2022, several pieces of footage were released showing how the Ukrainian army is using US-supplied M777 howitzers in its military operations. Their exact deployment location is unknown although the footage does come from Ukraine’s east.

Therefore, Ilya Kiva’s claim that Poland is intent to annex Ukraine’s west whilst weaponry and ammunition supplied from Europe will remain in Ukraine’s western regions is a conspiracy theory and an item of fake news which lacks any factual ground.