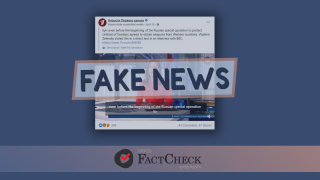 On 16 April 2022, Russia’s Channel 1’s Facebook page published a video of a broadcast where Ukrainian President Volodymyr Zelensky’s interview with the BBC was discussed and a number of disinformation messages about Russia’s invasion of Ukraine were voiced.

The anchor stated that President Zelensky reached an agreement with Western countries about weapons delivery long before Russia’s “special operation” to “protect civilians in Donbas” and showed an excerpt from Zelensky’s interview with the BBC where the president of Ukraine speaks about talks with the West about a weapons supply. The broadcast portrays this as some kind of acknowledgement that Zelensky was planning to start a war to take back Donbas. After the excerpt of Zelensky’s interview, the broadcast continues with a statement that the Russian armed forces have already published secret documents about how Kyiv’s regime planned to attack Donbas in March.

In fact, with the mass mobilisation of troops near Ukraine’s borders (as well as the arming of separatist forces in the Donetsk and Luhansk regions, the annexation of Crimea and deploying Russian military bases there), Russia posed a serious threat to Ukraine’s security and, therefore, Kyiv had to be mindful of defending itself, including by weapons acquisitions from the West.

The process started as early as spring 2021 when Russia deployed tens of thousands of troops near Ukraine’s borders in response to (as claimed by Moscow) “threats coming from NATO.” Afterwards, Russia claimed it withdrew some of its units. However, President Zelensky stated that Russia removed only a fraction of its troops and left massive forces near Ukraine’s borders. Since November 2021, Russia started to deploy additional forces to Ukraine’s borders which became irreversible. On 16 February 2022, Russia stated it was starting to withdraw some of its forces although this did not happen and Putin did not opt for the way of negotiations.

Volodymyr Zelensky has suggested meeting and having talks with Vladimir Putin multiple times during the crisis – first in April 2021 and later in January 2022 where the Ukrainian president was offering to meet his Russian counterpart in any format but not in Sochi. A few days before Russia’s full-swing attack, Zelensky also offered to meet Putin in his speech delivered at the Munich Security Conference, although Russia did not agree to Zelensky’s calls for meetings and talks.

The US, France, the UK, Germany and other countries (leaders of state/government or ministers of foreign affairs) also held talks on Ukraine with Russia, albeit to no avail. In a blatant breach of the fundamental tenets of international law, Russia attacked Ukraine.

Therefore, a claim that Ukraine was preparing attack on Donbass and this is why it was purchasing weapons from the West is fake news. In fact, it was Russia which was getting ready to attack Ukraine whilst the latter was seeking to peacefully solve the crisis and hold negotiations with Russia, although Russia still invaded Ukraine.

In fact, the document to which the pro-Kremlin media is making reference is neither secret nor actually proves Ukraine’s plans to attack Donbas. The published document is about military drills in the Lviv region and it does not even mention Donbas.

According to Ukraine’s national guard, classified documents are subject to a different format and protocol: a secret document should have a classification level and these types of document usually do not have the “By my signature I acknowledge that I have read the document” inscription. In addition, Ukraine’s national guard also confirmed that such types of orders are issued regularly every year and “this document has nothing to do with planning offensive operation. This is an order about holding training-fighting drills in the Lviv region” (see FactCheck’s article for more details).

An anchor from Russia’s Channel 1 says that Russia’s invasion of Ukraine and waging a war is a “Russian special operation to protect the peaceful population of Donbas.”

Most of the world governments, influential international NGOs and authoritative media outlets and think-tanks say that Russia’s invasion of Ukraine is a war.

The scale of fighting goes beyond a simple special operation level since Russia carried out a full-scale invasion of Ukraine with an invading force consisting of nearly 200,000 troops. Russia uses nearly all types of weaponry except for weapons of mass destruction (Russia has not yet used nuclear, chemical or biological weapons). In addition, according to NATO’s information on 23 March 2022, up to 40,000 Russian troops have been killed, wounded, taken prisoner or are missing in Ukraine. Therefore, Russia’s military actions which followed its invasion of Ukraine go beyond the scale of a “special operation” and, in fact, is a full-scale war (Europe has not seen a war of such scale in the 21st century). See FactCheck’s article for more details.

The claim that Russia does this to protect the peaceful population of Donbas is also a lie.

Despite robust rhetoric about an ostensible genocide in Ukraine, Russia has failed to prove its allegations. This is confirmed by the Assembly of All-Russian Officers which said: “The issue of genocide committed by Kyiv in south-east regions was not brought on the agenda either at the UN or at the OSCE.”

There is no evidence whatsoever that Ukraine systemically exterminated the peaceful population of Donbas. In addition, there is not a single international document or conclusion of any relevant international organisation whatsoever that would confirm Moscow’s allegations that Russian-speaking or ethnic Russian inhabitants of Ukraine’s east are being persecuted, leaving aside “genocide” committed by Ukrainian authorities. The OSCE mission which has been operating in Ukraine since 2014 has not found evidence to confirm any fact of Ukraine committing genocide in Donbas. This is proven by reports published by the Council of Europe, the UN High Commission for Human Rights and the OSCE.

Ukraine lodged a case in The Hague’s International Court of Justice (UN’s top judiciary body) to protest Russia’s use of the alleged “pretext for the invasion of Ukraine that Russia plans to finish the genocide in Donbas committed by Ukraine.” The International Court of Justice (ICJ) released a preliminary decision over Ukraine’s case against Russia on 16 March 2022. The case was about Russia’s false claims about genocide and using these claims to justify its aggression against Ukraine. The court declared: “Under these circumstances, the Court considers that Ukraine has a plausible right not to be subjected to military operations by the Russian Federation for the purpose of preventing and punishing an alleged genocide on the territory of Ukraine.” The ICJ also called for the Russian Federation to “immediately suspend the military operations that it commenced on 24 February 2022 on the territory of Ukraine” and said that “the Russian Federation shall ensure that any military or irregular armed units which may be directed or supported by it, as well as any organisations and persons which may be subject to its control or direction, take no steps in the furtherance of the military operations.”