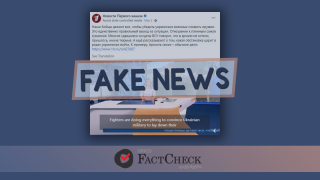 On 3 May 2022, Russia’s Channel 1 published some propaganda footage about Ukrainian prisoners of war (POWs) on its Facebook page. In the video, there were calls to refrain from shooting at Ukrainian soldiers and convincing them to lay down their arms. In addition, the footage contains the claim that the Russians treat Ukrainian POWs the most humanely. To confirm this claim, the footage shows one of the camps where the Russians are holding Ukrainian POWs. The broadcast shows that the Ukrainian POWs are kept in good conditions which they themselves confirm in the interviews.

However, there is a probability that the conditions shown in footage were staged for recording or/and the Ukrainian POWs were giving interviews under pressure – as they are held in captivity, Russia has the leverage to make them say anything it wants. For instance, Russia’s Channel 1 published a video of Maryana Vishegirskaya, a pregnant woman, who ended up in a piece of footage recorded after the shelling of Mariupol’s maternity hospital which was supposedly recorded on Russian-controlled territory. Ms Vishegirskaya was disseminating incorrect information about the attack which indicates that she was somehow forced to do so (see FactCheck’s article for more details). Therefore, the broadcast of Russia’s Channel 1 is not a reliable source and it is impossible to accept the information as true or correct in order to confirm the authenticity of the situation and the interviews shown in the aforementioned piece of footage. It is also implausible to generalise the information contained in a single piece of footage and make the claim that the Russians treat their Ukrainian captives the most humanely since there are many facts that would contradict this claim.

The authoritative human rights organisation, Human Rights Watch, called on Russia to respect the rights of POWs. According to Human Rights Watch, broadcasting programmes featuring images of and interviews with captured Ukrainian soldiers violates the Geneva Convention and, therefore, Russia’s Channel 1 is committing a violation of the Geneva Convention. Human Rights Watch argued that exposing POWs to public curiosity violates their protection under the Geneva Convention intended to ensure the dignified treatment of captured combatants on all sides. As stated by a senior legal adviser of Human Rights Watch, the Geneva Convention is to protect POWs from being objects of public curiosity as well as from intimidation or humiliation. Human Rights Watch’s statement on 28 April 2022 says that the programmes aired on Russia’s Channel 1 and Zvezda where Ukrainian POWs were telling their stories and praising the medical treatment they received after being captured are examples of such a violation. The International Committee of the Red Cross (ICRC) has made clear that any material that allows viewers or readers to identify individual prisoners should not be made public except for exceptional circumstances which allow for the exemption (if there is a compelling public interest or if exposing the materials is in the prisoner’s vital interest).

In addition, Human Rights Watch also said that the 13 April report published under the auspices of the OSCE expressed concern that both sides (Russia and Ukraine) had violated the rights of POWs since they are not allowing the International Committee of the Red Cross to visit prisoners.

The 26 March 2022 report of the UN’s Human Rights Monitoring Mission in Ukraine notes a large number of videos with intimidation and insults of Ukrainian POWs following their capture. According to the report, there are also videos depicting interrogations of POWs immediately after their capture and some POWs had visible signs of bruises.

On 29 March 2022, Matilda Bogner, Head of the UN’s Human Rights office in Ukraine, said that a number of videos of the abuse of Russian and Ukrainian prisoners were being examined, adding that “it does raise serious concerns.” Of additional note is that the Government of Ukraine started an investigation of those videos and stated that they were taking the issue very seriously. A member of President Zelensky’s administration, Presidential Office Advisor Oleksey Orestovich, stated that if this turns out to be real, this is absolutely unacceptable behaviour.

Returning Ukrainian POWs speak about their mistreatment from the Russians and say that the Geneva Convention was breached when they were held in captivity. Ukrainian Human Rights Ombudswoman, Lyudmyla Denisova, also made a statement about this and said that former prisoners had reported that they had been kept in basements, denied food and made to take off their uniforms. According to Ms Denisova’s assessment, Russia’s actions were flagrant violations of the Geneva Convention. She also stated that Ukrainian POWs were beaten in prison camps.

Apart from POWs as such, Russia has captured a number of civilians and it is also relevant to have a look at how they were treated. For instance, BBC published an article about Nikita Horban, a lab assistant at a Kyiv hospital, who was held captive in Russia. He was captured in Andriivka, a small village west of Kyiv. He remembers that the Russians were beating people when taking captives as well as shooting and killing them. The captives were later subjected to torture and Mr Horban himself had clear signs of torture when he came back to Ukraine after a prisoner swap. Whilst being transported to Russia, both of his feet were injured because of the severe conditions. Despite pleading for medical assistance, he did not receive medical help. Some captives who shared a cell with him lost their legs altogether. Mr Horban remembers that a Russian doctor told him: "We have good medicine and medical treatment here, but it is not for you." In addition, Ukrainian prisoners were forced to perform and learn Russia’s national anthem by heart. He added that prisoners were interrogated two or three times a day and beaten. Afterwards, they were forced to sign documents declaring they had been treated and fed well and not harmed. After three weeks in the prison, the condition of Nikita Horban's feet had worsened so much that he was finally transferred to a hospital with two others where he had to have his toes amputated. Of additional interest is that the Russians told Deputy Prime Minister, Irina Vereshchuk, Ukraine’s chief negotiator, that they had no spare ambulances and so even gravely injured prisoners were put in the back of trucks for the five-hour drive.

Therefore, the claim that the Russians treat Ukrainian POWs the most humanely is a Kremlin propaganda message which has no real ground.