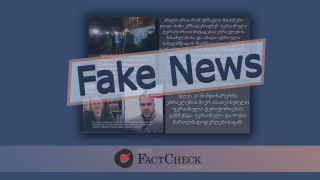 Disinformation: Jewish Masons Plan to Capture Ukraine’s Territory and Orestovych Himself Confirmed That

A piece of footage showing the ceremony of the start of the construction of Jewish Centre in Ukraine was disseminated through Facebook. According to the caption, the Jews want to bring the Antichrist to Ukraine and the current situation is also proof that their primary objective is to empty Ukraine of its Orthodox believers.

This piece of footage was also released by the Miraculous Victory Movement Facebook page which claimed that the “Ukrainian authorities made a slip of the tongue about the main goal of this war.” Therein, there is the claim that the Jewish masons have long been preparing to capture Ukraine’s territories, to resettle Jews there and to create a new Jewish state. At the end of the footage, there is an interview with Oleksiy Orestovych, Adviser to the Head of the Office of the President of Ukraine, used by authors of the publication to indicate that the Ukrainian side also confirms the existence of the Jewish “plan.”

In fact, the words of Oleksiy Orestovych are an excerpt from his 11 April 2022 interview with ФЕЙГИН LIVE which was disseminated with a distorted context.

In his interview, Oleksiy Orestovych speaks about the war in Ukraine and the future of Ukraine. In particular, he stated: “I am going to say an even more dangerous thing as we are having an evening of frightening stories. This will not be the last war with the Russian Federation. This is similar to Israel and the Arabs which fought five big wars against each other before understanding that these methods do not work and they have to come up with something else. Some Arab countries opted for peace, like Jordan and Egypt, whilst some others continue to twist and turn. I do not know whether or not it will take five wars, although I think there will be several military clashes, as we spoke earlier, before 2035 or 2032. This means new clashes every two or possibly every five years and a large-scale conflagration every seven to eight years and only the most steadfast will endure this. To those who are not ready and continue to yell – How is this possible, how we can live and raise our children? – then you need some other country and this, here today, is a new Israel. Although, here the scale is bigger and more fearsome. I am not going to send my family away, everyone is here and I stay here as well. For those who are not ready, there is balmy Spain and many other wonderful countries. Go there if you are not ready for this.”

Therefore, it is evident that Oleksiy Orestovych – in order to describe the future relations between Ukraine and Russia – compares the conformation between Ukraine and Russia to that of the long-standing confrontation between Israel and the Arab countries. Mr Orestovych’s phrase that “Ukraine should be a new Israel” reflects the position of the Government of Ukraine that Ukraine, similar to Israel, stands ready for years-long resistance and the augmentation of its own defensive capacity.

In regard to anti-Semitic claims in the publication that the Jews are planning to cleanse Ukraine’s territory of its Orthodox believers, this is an oft-repeated conspiracy theory. The ceremony of the opening of a building which is referred to as belonging to “masons” was, in fact, the launch of the construction of a Jewish multi-profile charity centre, Beit Mashiach, in Dnipro in 2019 and has no links to the Jews bringing the Antichrist into power. Since the outbreak of Russia’s war against Ukraine, anti-Semitic conspiracy theories have started to flourish. The aforementioned publication is also a part of that disinformation campaign.