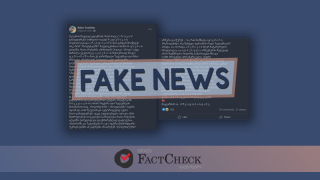 Disinformation: Ukraine’s Verkhovna Rada was elected as a result of fraudulent elections

On 6 May 2022, Facebook user Bakur Svanidze made a publication where he claimed that Ukraine’s legislative body was elected as a result of fraudulent elections. The author argued that the US interfered in Ukraine’s election process in 2019. In fact, this claim is groundless and parrots the pro-Kremlin propaganda and conspiracy theory which says that the US and the West are lurking behind every democratic process which is unacceptable for Moscow’s interests.

Video footage of a Kartuli TV show where multiple false claims were voiced about the coronavirus pandemic, monkeypox and ways for its infection was also disseminated on Facebook.

According to Freedom House’s reports, Ukraine is not a fully democratic state but a hybrid one. International observers speak about certain violations identified during elections in Ukraine, although they concluded that the elections were neither illegitimate nor fraudulent. Among other things, international observers highlighted some violations during the 2019 elections, although their overall assessment was that elections were competitive and transparent. According to the OSCE/ODIHR’s report, the elections were overall conducted in a competitive environment and the rights and the freedoms of the voters were guaranteed despite vote buying and some officials using their authority for personal benefit. The National Democratic Institute (NDI) assessed these elections as a “remarkable achievement.” The NDI also stated that the parliamentary elections expressed the will of voters and were in line with Ukraine’s laws as well as international standards.

Of note is that it was then President Petro Poroshenko and his political alliance which positioned themselves as the main pro-Western force in 2019. Volodymyr Zelensky had a less harsh rhetoric vis-à-vis Russia as compared to Mr Poroshenko whose opponents were often referring to him (Zelensky) as pro-Russian. Many in Moscow were overjoyed when Zelensky beat Poroshenko in the elections. For instance, then Russian Prime Minister Dmitry Medvedev said there was a chance to improve relations between Russia and Ukraine.

Of further note is that it was the Kremlin, not the USA, which sought interference in Ukraine’s parliamentary elections. According to the NDI’s reports, Russia was carrying out a disinformation campaign which hindered Ukrainian voters from obtaining impartial information. Russian media outlets tried to discredit some parties and politicians and denounced the elections as a “circus.”

Russia tried to interfere not only in Ukraine’s parliamentary elections but also in the country’s presidential elections which were held a few months before. According to the analytical think-tank the Atlantic Council, Russia sought to discredit the election process and its reliability as a whole. The main message of the disinformation campaign was about the legitimacy of the elections. The Kremlin argued that vote rigging was inevitable. Russian media outlets disregarded neutral or positive assessments from international observers, such as the Parliamentary Assembly of the Council of Europe, and exaggerated even a minor negative assessment. President Poroshenko was the main target of their attacks.

The aforementioned Facebook publication also contained a claim that Zelensky and Orestovich wish to deliberately destroy the Azov regiment. The leaders of the Azov battalion, stranded in Mariupol, have indeed made statements critical of Ukraine’s central government, although their statements were not about intentionally abandoning and sacrificing Azov but were mostly calls for more robust efforts from the government. For instance, Deputy Commander of the Azov Regiment, Sviatoslav Palamar, stated that the government’s decision to celebrate the evacuation of only 100 civilians was a cynical act and a mass evacuation would have been possible had they better performed their duties.

Ukraine’s government expressed a wish to open talks with Russian authorities over the evacuation of the Azov regiment as early as on 20 April 2022. On 10 May 2022, President Zelensky stated that the Ukrainian authorities were using every available diplomatic instrument to take out the troops and the civilians stranded in Mariupol; however, Russia was unwilling to compromise on this issue. Ukraine even had the president of Finland involved in the negotiations and Kyiv expressed hope on 13 May 2022 that his mediation would make it possible to evacuate not only alive and wounded fighters but carry out the dead as well. On 16 May 2022, Commander of the Azov Regiment, LtC Denis Prokopenko, stated that the fighters holding ground in Azovstal are obeying the decision of Ukraine’s supreme commander-in-chief in order to save lives. In his evening address, President Zelensky stated that the country’s armed forces and special services were working with the Red Cross and the UN to evacuate fighters from Mariupol and added that “Ukraine needs Ukrainian heroes alive.” On 17 May 2022, Ukraine’s general staff stated that the defenders of Mariupol have fulfilled their mission. According to this statement, 53 wounded fighters were transferred to Novoazovsk for medical treatment and 211 troops were taken to Olenivka via a humanitarian corridor. The general staff said that the Azovstal defenders were “heroes of our time” and added that the fighters will come back to Ukraine-controlled territory after a swap with Russia. Ukraine also stated that work is in progress to evacuate nearly 1,000 soldiers still stranded in the city.

Therefore, the claim that Zelensky’s government intentionally abandoned the Azov fighters is groundless and completely disregards the main culprit for the blockade of Mariupol and Azovstal which is Russia. Taking Mariupol was one of the biggest priorities for Russia from the very beginning of the invasion with the blockade having started at an early stage on 2 March 2022. Ukraine continued aiding the besieged fighters for weeks. Ukraine’s armed forces took several risky flights by helicopters in order to deliver weapons to the city garrison and evacuate wounded fighters, although in the next stage of war it became impossible to help the Azov regiment in this way. Of note is that the international community believes it is Russia which is responsible for the dire humanitarian situation in Mariupol. The UN resolution, Humanitarian Consequences of the Aggression Against Ukraine, which is supported by 140 nations, condemns Russia’s attack on Mariupol and having the city under siege.