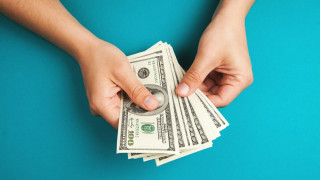 How Much did the Real Cash Incomes of the Population Increase in 2021?

The National Statistics Office of Georgia published figures of quality of life statistics for 2021 which attracted interest and comments from Georgian nationals on social networks. In 2021, the average monthly incomes (sum of cash and non-cash inflows) of the Georgian population amounted to GEL 1,360.2 million which is 13.9% more as compared to the same figure of 2020. According to 2021’s data, the average monthly incomes per one household increased by 11% and reached GEL 1,221.80.

As reported by the National Statistics Office of Georgia, the volume of cash incomes and transfers only (does not include money lending, use of savings and selling property) constituted GEL 1.17 billion which is a 12.8% growth as compared to 2020. Table 1 shows the detailed statistical data. 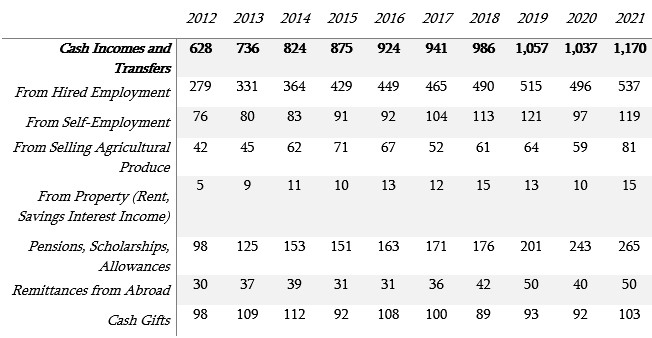 The average monthly income from hired labour in the overarching structure of cash incomes and transfers increased by 8.4% in 2021 as compared to 2020 and reached GEL 537 million. However, the share of income from hired labour decreased by 1.9 percentage points vis-à-vis total incomes and amounted to 45.9% as compared to 2020. Of interest is that money received from pensions, scholarships and allowances as well as remittances from abroad and cash gifts were GEL 418 million in 2021 which constituted 35% of total incomes. This is a clear indicator that the population struggles to make their livings by labour alone and they remain dependent on various types of assistance.

At the same time, the statistics of 2020-2021 were largely defined by the pandemic. In order to take a look at a larger dynamic, it would be appropriate to make comparisons with the pre-pandemic period. Average monthly cash incomes and transfers increased by 10.7% in 2021 as compared to 2019 which is a lesser growth as compared to 2020 (12.8%). Of additional interest is that incomes from hired labour increased by merely 4.3% in 2021 as compared to 2019. The greatest rise in incomes at 31% is seen in pensions, scholarships and allowances, partially attributable to assistances disbursed because of COVID-19. Money for these handouts was attracted at the expense of borrowing and a sharp growth of the deficit and, therefore, these benefits are unsustainable in the long run. Incomes from selling agricultural produce, which increased by 25.4% as compared to 2019, rank second behind pensions, scholarships and allowances. In the case of agriculture, we may assume that the growth of incomes was attributable to higher inflation on food products. In total, money inflows from social assistance, pensions and scholarships as well as foreign remittances and cash gifts amounted to GEL 344 million in 2019 which constituted 32.5% of total incomes and were 3.2 percentage points lower as compared to 2021. However, this figure still was not at a satisfactory level vis-à-vis the total incomes.

Analysis of the income dynamic together with consumer inflation is of crucial importance. Simultaneously with price growth, the population’s purchasing power decreases which means they can purchase less goods and services which negatively affects their well-being. In 2021, the problem of inflation was critical for the population, especially amid the pandemic which gave rise to a number of economic restrictions. Most concerning is that price growth was much higher in some groups of consumer goods which have a key importance for the population and contain some essential services and staple foods as compared to the average inflation figures. Of note is that Georgia’s gross domestic product increased by nearly 10.4% in 2021. It is interesting to see how this was reflected in the population’s income figures.

Since we are speaking about average monthly incomes, it would be relevant to calculate real figures based on the average annual inflation (the 12-month average inflation vis-à-vis the 12-month average inflation of the previous year). In 2021, real cash incomes per household increased by 0.4% as compared to 2020 which – as opposed to economic growth figures – is only a marginal improvement. Therefore, we may conclude that the economic growth rate was not reflected on the growth of the population’s income. Furthermore, average monthly real incomes per household in 2020-2021 dropped to their lowest level since 2013.