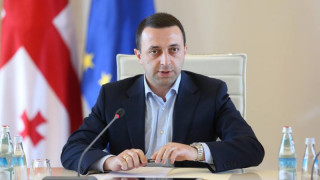 “According to the IMF’s preliminary estimates, Georgia is ranked third in the world and first on the Eurasian continent in terms of the GDP growth rate in USD. The GDP will double in the next six years and exceed USD 9,000.”

Verdict: FactCheck concludes that Irakli Gharibashvili’s statement is a MANIPULATION.

Irakli Gharibashvili: “According to the IMF’s preliminary estimates, Georgia is ranked third in the world and first on the Eurasian continent in terms of the GDP growth rate in USD. The GDP will double in the next six years and exceed USD 9,000.”

Verdict: FactCheck concludes that Irakli Gharibashvili’s statement is a MANIPULATION.

According to the International Monetary Fund’s (IMF) estimates, it is true that Georgia’s nominal GDP in USD will reach USD 9,000 in 2027 which constitutes an increase by 83%. However, the Prime Minister discussed the GDP growth rate with a wrong (nominal) figure. In addition, Georgia is ranked in the sixth position globally instead of the third whilst the country is ranked second on the Eurasian continent in terms of the percentage growth of the GDP per capita.

The gross domestic product (GDP) dynamic is reflected by the real gross domestic product which excludes the price growth effect in itself and, therefore, measures the numerical dimension of goods and services produced in a specific year. According to the IMF’s forecast, Georgia’s real GDP per capita will increase by 36.4% instead of doubling in 2027 as compared to 2021. With this forecast, Georgia is ranked in the sixth position in the world in terms of the USD-calculated nominal figure. Among European and Asian countries, Georgia is outperformed by Moldova, India, Vietnam and Bangladesh.

Therefore, FactCheck concludes that Irakli Gharibashvili’s statement is a manipulation because he makes reference to nominal figures for the purposes of analysis in time and, thereby, exaggerates the expected degree of economic growth despite the fact that the forecast figures are quite good.

The Prime Minister of Georgia, Irakli Gharibashvili, stated at the session of the government: “The IMF published preliminary estimates a few days ago and here as well, our country was ranked in the third position among 190 nations in terms of the GDP growth in USD, Georgia is ranked first on the Eurasian continent and the GDP per capita will double in the next six years and exceed USD 9,000.”

The International Monetary Fund (IMF) is an authoritative international organisation which bears the status of a United Nations specialised agency. The IMF aims to support the global financial system through the monitoring of foreign exchange rates and balances of payments. It also offers needs-based technical and financial assistance to developing nations.

The IMF’s World Economic Outlook’s (WEO) database is published twice every year in spring and autumn. The Prime Minister’s statement is based on April’s outlook, estimating that the USD-denominated GDP per capita will be USD 9,200 (respective statistics are given in Table 1) for 2027 which constitutes an 83.3% growth as compared to 2021’s figure. With this growth rate, Georgia is ranked sixth among 190 countries and the second among European and Asian countries.

On the other hand, it would be wrong to use Irakli Gharibashvili’s figures to discuss the GDP dynamic. The size and scale of a country’s economy are measured by its gross domestic product (GDP) which indicates the total amount of goods and services produced in a year for final consumption. The real gross domestic product (GDP) calculated in a national currency is a widely accepted and objective measurement to assess any country’s economic development trend and leads to an objective understanding of a country’s economic growth.

Naturally, all respected organisations use this indicator to measure the GDP dynamic. The selection of an irrelevant unit for the analysis leads us to false conclusions. For instance, the nominal GDP is not free from inflationary processes and using it for analysis in time (a comparison of the data for different years) is incorrect, particularly in this context when there are high inflation rates worldwide, especially in Georgia. For instance, Georgia’s nominal GDP increased slightly in 2019 but the real GDP decreased by 6.8%. It is even more incorrect to use a USD-converted nominal GDP figure which includes the effect of the currency exchange fluctuation on top of inflation and distorts the real trend. In this case, Irakli Gharibashvili precisely uses this indicator for analysis which has historically shown the most erroneous picture among the existing alternatives. To highlight the speculative nature of using a USD-converted GDP for analysis, some examples can be provided. For instance, Norway’s USD-denominated nominal GDP per capita shrank by nearly 23.7% as a result of the depreciation of the local NOK vis-à-vis USD in 2015 and dropped to USD 74,000 when it had been USD 97,000 in 2014. However, this does not naturally mean that Norway’s economy decreased and its GDP did not increase in that year.

In addition, when we speak about a high growth, which also includes a comparison with developed countries, of necessary mention is the base effect since most European countries are much richer than Georgia. Therefore, changes in a smaller indicator results in a higher percentage than the changes in the larger indicators. At the same time, a relatively lower economic growth rate in developed countries is caused by an economic effect which is known as the so-called diminishing marginal return law. This means that each additional unit of the factors of production (for instance, human resources or capital) results in a smaller output. Developed countries use their existing resources for production and technologies almost fully and are very close to the top margin of output. Therefore, their potential for further growth is limited.