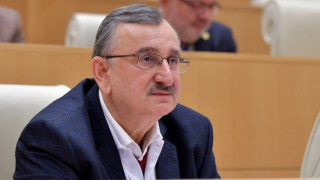 Verdict: FactCheck concludes that Roman Gotsiridze’s statement is HALF TRUE

Verdict: FactCheck concludes that Roman Gotsiridze’s statement is HALF TRUE.

According to the draft 2023 budget, revenues are forecasted to grow by 60% to USD 21.3 billion as compared to 2019. At the same time, there is a 60% forecasted growth in income. The debt to the total revenues ratio decreases, while the common budget deficit to the GDP ratio is set to increase only marginally as compared to 2019, returning to the pre-pandemic levels.

The central idea of Roman Gotsiridze’s statement stating that the budget growth is explained by inflation is fair because part of the growth is obviously nominal. An analysis based on the consumer price index can only be tentative since the budget consists of other non-consumer expenses as well. At the same time, since price growth is higher based on different price growth indices, Mr Gotsiridze’s remark is relevant. As compared to 2019, budget payables increased by 57% in 2022 whilst the forecasted annual growth figure for the consumer price index is 34.6%. Therefore, for indicative purposes, the real budget growth in 2023 will be around 16% as compared to 2019 if budget payables are adjusted to real figures by consumer prices.

The draft 2023 state budget is under consideration in the Parliament of Georgia. United National Movement MP, Roman Gotsiridze, made a Facebook publication about the budget document: “The budget in 2019 was GEL 13.47 billion and it will be GEL 21.15 billion in 2023. Taking into account the real purchasing power; that is, price growth, it will only be GEL 14.95 billion (a growth of 11%) and there are lot of debts in this growth.”

Incomes, which do not include obligations, consist mostly of tax revenues and are, therefore, linked with the nominal growth (which partially encompasses the real growth) of the economy. According to the draft 2023 budget plan, incomes are set to increase in a percentage similar to revenues which is nearly 61% as compared to 2019. Therefore, that part of Roman Gotsiridze’s statement where he speaks about the larger share of the growth of obligations in the total budget growth as compared to 2019 and, thereby, implies some structural weaknesses is groundless. Of additional note is that according to the planned data, the common budget deficit accounts for 2.8% of the GDP whilst the deficit equalled 2.7% of the GDP in 2019, which is a comparably slight increase.

The central idea of Roman Gotsiridze’s statement where he highlights inflation as a part of budget growth is fair. According to recent data, inflation is a critical problem and it will persist as a problem for 2023 according to current forecasts alongside the average annual inflation at 4.7%. Both in the case of the GDP and the budget, part of the growth is nominal and less goods and services can be purchased with GEL 1 million from the budget in 2023 as compared to 2019 owing to inflation. Therefore, the “real budget” increases to even lesser extent. In this regard, price growth has a double impact on budget revenues as the budget’s nominal tax incomes increase, on the one hand, and the budget’s real purchasing power shrinks, on the other hand. However, guiding oneself with consumer prices can only be partially justified when it comes to labour remuneration as well as the purchase of goods and services which are covered by the consumer growth index, etc. It is only natural that budget expenses are spent on some other things as well such as economic activity, debt service, the acquisition of a variety of non-consumer goods, etc. An analysis based on the consumer price index can only be tentative since price growth was higher according to different price growth indices such as the industrial price index, the construction price index, etc. As compared to 2019, budget payables increased by 57% in 2022 whilst the forecasted annual growth figure for the consumer price index is 34.6%. Therefore, for indicative purposes, the real budget growth in 2023 will be around 16% as compared to 2019 if budget payables are adjusted to real figures by consumer prices.