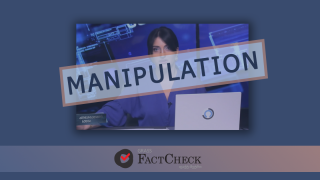 Manipulation: “It is MEP Viola von Cramon, not us, who says that the candidate status will not bring riches and prosperity.”

On 3 October, on air on Alt-Info, the anchor of the Alternatiuli Khedva broadcast, Tatia Gabritchidze, stated: “It is MEP Viola von Cramon, not us, who says that the candidate status will not bring riches and prosperity. However, our grant-eater NGOs deceive us and seek to convince us that we will automatically get richer.”

Tatia Gabritchidze’s this claim is manipulative and distorts the context of MEP Viola von Cramon’s statement.

In the aftermath of 23-24 June European Council summit (mostly dedicated to enlargement issues), Viola von Cramon expressed her dissatisfaction over decisions adopted vis-à-vis Ukraine and Moldova. According to the MEP, granting the candidate status to those countries in a geopolitically very tense situation did not cost anything. In her interview with Euractive, Ms Von Cramon stated:

“They (Ukraine and Moldova) can be with this candidate status in the waiting room, as we have seen with Turkey and the Western Balkans, forever. The candidate status is the least the EU leaders could do without having any financial obligations.”

It is important to understand that the author made this statement within the context of a geopolitically tense situation. In particular, it is discernible from her words that Viola von Cramon is expressing her dissatisfaction for giving candidate status to the two countries, not because the status means nothing but because this is the very least that the European Union could have done amid the ongoing brutal war in the region and in their opposition of the war.

Of additional note is that the MEP also indicated her discontent over the decision not to grant candidate status to Bosnia and Herzegovina in the same interview.

After the European Council’s decision vis-à-vis Georgia, Viola von Cramon made the following publication on her Twitter account: “I hope to also be celebrating the candidacy of Georgia in the six month from now. For that, the Government of Georgia needs to start delivering. The EU’s instructions are crystal clear. Georgian Dream – the ball is in your court.”

A generalization of the MEP’s assessment vis-à-vis Ukraine and Moldova and the claim that candidate status could not bring financial benefits to Georgia is a manipulation. In this manner, the anchor of the Alternatiuli Khedva broadcast, Tatia Gabritchidze, seeks to denigrate the importance of the candidate status, on the one hand, and convince viewers that Viola von Cramon also believes that the status is meaningless, on the other hand.

FactCheck reached out to Viola von Cramon to obtain clarification over her views expressed in the interview with Euractive.

In her letter to FactCheck, the MEP expresses regret that radical, far-right and pro-Russian groups had wrongly interpreted her words and used them to promote anti-Western narratives.

The MEP also added an extensive explanation over the importance of the candidate status and emphasised those financial benefits which granting candidate status may imply: “Although candidate status does not automatically entitle a country to access EU funds, it enables them to start membership talks and request pre-membership assistance. This assistance which potentially could be billions of EUR is an investment in a country to make sure that a future member complies with the EU standards in terms of economic and political indictors.”

Viola von Cramon also mentioned that Ukraine and Moldova are one step away from those funds whilst it is two steps in the case of Georgia. According to her, theoretically it is possible to make an exception and allow potential candidate to access those funds, although that would be rather complicated and less likely.

As stated by the MEP, candidate status entails a huge political importance which indirectly leads to a generation of prosperity and political stability. She also clarified that the EU perceives candidate countries differently from other nations and is usually more open to offering different types of benefits.

Briefly – What does candidate status mean and what benefits does it bring?

The completion of the first phase does not provide an automatic EU membership guarantee. Moreover, the process may take quite a long time (like in case of Turkey which has been granted candidate status since 1999). Nevertheless, having a candidate status bears a huge importance because it is the first officially confirmed step on the way to EU membership (see FactCheck’s article on this topic).

On top of the massive political importance, candidate status also brings a wider spectrum of financial opportunities. Countries with candidate status and potential candidates have access to the Instrument of Pre-Accession Assistance (IPA) through which they obtain financial aid from the EU. This instrument has been active since 2007 when it replaced the EU’s other financial programmes.

Currently, the European Commission plans to allocate nearly EUR 14.2 million as part of the IPA III (2021-2027) which should be spent on political, institutional, economic, legal, administrative and social reforms in the candidate and potential candidate countries.

Of note is that the Economic and Investment Plan (EIP), through which the candidate countries (western Balkans) will get EUR 9 in billion funding, is linked to the IPA. In addition, the plan envisions the mobilisation of an additional EUR 20 billion in 2021-2027 from private investors and international financial institutions. This instrument will be focused on investments in the fields as follows: sustainable transport, clean environment and energy, climate change, digital future, private sector development, etc. According to the estimates of the World Bank, if these opportunities are seized timely and properly, it will be possible to have a nearly 6.7% GDP growth in the western Balkan countries.

NDICI – Global Europe comprises grants and combined resources through which the EU will support state and private investments across the globe to help sustainable development. The investments will be insured by External Action Guarantee which amounts to EUR 53.4 billion and will be available to the candidate countries.

Of note is that the IPA beneficiaries used to have access to over ten programmes of the EU as a part of the previous assistance elements provided by the financial instruments. For instance, Georgia participates in a relatively limited number of the EU-provided programmes such as Erasmus+, Horizon 2020, Creative Europe, EU4YOUTH and the Black Sea Interreg Programme.

To repeat what FactCheck has already written, there are ample potential benefits and opportunities for countries with candidate status. However, what is more important and what needs to be highlighted is that support from the EU is usually linked with delivering some pre-conditions. It is possible to say that in both cases – whether having or not having candidate status – obtaining assistance from the EU depends entirely on the relevant country’s actions and efforts.