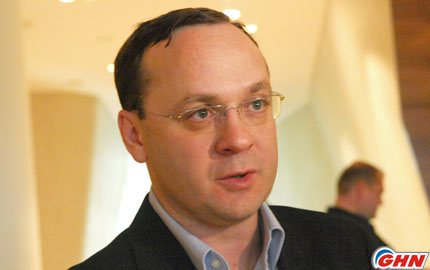 “Giorgi Khachidze has not attended any hearings [in the Environmental Protection and Natural Resources Committee] for the last two months."

Proposed amendments to the Law of Georgia on Environmental Protection were discussed at the plenary session of the Parliament of Georgia on 29 May 2013. During the debates on the bill, Giorgi Tsagareishvili stated that former Minister Giorgi Khachidze has not attended any hearings in the Environmental Protection and Natural Resources Committee for the last two months. Giorgi Tsagareishvili responded to Giorgi Khachidze’s comment when the former Minister reminded the Ministry of Environmental and Natural Resources Protection of Georgia about damaging  the travertines during construction of the Gudauri-Kobi road and called for increased attention and effectiveness regarding the protected territories.

wondered whether or not Giorgi Khachidze was in fact attending hearings in the Environmental Protection and Natural Resources Committee during the abovementioned period.

Convocation. Bidzina Gujabidze, Gogla Zhvania and Giorgi Khachidze are Deputy Chairpersons (the Committee has nine other members). Committee meetings are convened and managed by the Chairman of the Committee. In the case of his absence, the Deputy Chairman takes the responsibility. The frequency of sessions is determined by the Committee, however at least two meetings should be held during the session period.

Committee sessions are usually held on Tuesday and Thursday during the week of plenary sessions and the week of meetings with voters. Members of the Committee should be notified about the date of the committee meeting no later than one day prior to the meeting. Every member of the Committee is obliged to attend and participate in the work of the Committee. Otherwise, Paragraph 8 under Article 286 of the Parliament’s Rules of Procedure will impose responsibility on a Committee Member. In particular, if an MP, who is a member of two committees, does not attend committee meetings three times during a calendar month without good reason and if the MP, as a  member of a committee, is absent at the committee meetings two times in a calendar month, 10% of his/her salary will be deducted.

If an MP has notified the chairman of a session in advance about his absence or the committee meeting is convened with the breach of requirements outlined in the Paragraph 5 and Paragraph 8 under Article 49 of the Parliament’s Rules of Procedure (the MP was not notified about the meeting at least one day prior to the meeting, but much later, and the required number of MPs has not been violated - 1/3 of the committee members on the list), then the MP has not missed the meeting without good reason.

Based on the requested information from the Parliament of Georgia, we found out that ten meetings were held in the Environmental Protection and Natural Resources Committee in April and May. MP Giorgi Khachidze has not attended any of these meetings. It is recorded that he has missed three sessions with good reason and seven without good reason.

Attendance records of the Environmental Protection and Natural Resources Committee of the Parliament of Georgia indicate that MP Giorgi Khachidze has not attended any of the Committee meetings convened in either April or May.