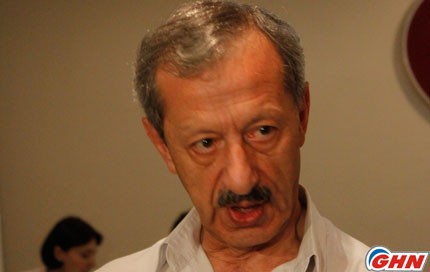 “A possibility emerges for a draft law presented by the government to become a law even without the voting of the Parliament.”

At the plenary session of 18 September, Vakhtang Khmaladze, representative of the Parliamentary

At the plenary session of 18 September, Vakhtang Khmaladze, representative of the Parliamentary Majority, made the following statement with regard to the new edition of Article 811 of the Constitutional Law adopted on 15 October 2010: “A possibility emerges for a draft law presented by the government to become a law even without the voting of the Parliament.”

The indicated edition of Article 811, which was intended to come into force after the presidential elections of 27 October, has already been removed from the draft Constitution by the Parliament with the Constitutional Law of 4 October 2013. This notwithstanding and in consideration of the importance and the controversy of the issue, FactCheck decided to check the accuracy of Vakhtang Khmaladze’s statement and determine whether or not the threats were as tangible and complex as claimed by the MP.

Article 81 defines the procedure for withdrawing confidence from the Government. Two-fifths of the total composition of the Parliament can bring forward a motion of non-confidence. No less than 20 and no more than 25 days after the proposition of the motion, the Parliament has to vote on one new (or two) candidates of the Prime Minister to be presented to the President. In the course of five days after the presentation, the President makes a decision either to officially name a candidate(s) or reject the proposed candidate(s). If the President refuses to appoint the candidate, the Parliament may decide – within 20 to 25 days – by at least three-fifths to re-present the same candidate(s) in which case the President is obliged to appoint him or her (or one of them if there are two).

Pursuant to Paragraph 6 of the new edition of the same Article, “in the case of the Parliament declaring non-confidence to the new Government, the President is authorised to dismiss the Parliament in three days’ time and hold early elections.”

It is of interest to examine how the European Commission for Democracy through Law (Venice Commission) evaluates the procedure of the Parliament declaring non-confidence to the Government. The Venice Commission’s Final Opinion on the Draft Constitutional Law on Amendments and Changes to the Constitution of Georgia (

CDL(2010)028) states the Parliament’s declaration of non-confidence to the Government is a lengthy and complicated procedure. The Final Opinion reads: “the rules on the motion of non-confidence should be reconsidered and revised. There does not appear to be any need for an initial vote to “launch” the procedure of non-confidence; there should be only one vote. The requirement under Article 81 Paragraph 4 (second proposal by Parliament of the same candidate with three-fifths of the votes) does not really fit into the general scheme of distribution of power. It is not logical to require the support of two-fifths of the MPs for the Prime Minister but to demand three-fifths in order to overcome a Presidential veto raised in the non-confidence procedure. This gives too much power to the President and diminishes not only the power of Parliament but also the political responsibility of the Prime Minister that should be a corner stone in the new system.”

As for the Commission’s evaluation of Article 811 which was removed from the Constitution, the report reads: “The Parliament’s refusal to declare its confidence in the government opens the procedure of constructive confidence provided in Article 81. In this context, the real margin of manoeuvre of the Parliament, faced with the threat of dissolution, can therefore be questioned.”

As can be gathered from above, the Venice Commission deems the non-confidence procedure as “lengthy” and “complicated.”