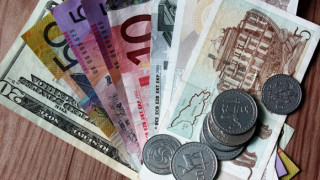 All About the GEL Exchange Rate – Where Lies a Solution?

The Impact of the Pandemic on the GEL Exchange Rate

In light of the current pandemic-induced economic crisis, world currencies started to depreciate against the USD. In the case of GEL, the depreciation of the GEL exchange rate has been evident since 10 March 2020 and peaked on 27 March when the USD to GEL exchange rate was 3.48. In the next days, the exchange rate fluctuated in the vicinity of 3.28. In two weeks, the National Bank of Georgia made two interventions in currency auctions. On 13 March, the National Bank of Georgia sold USD 20 million at a currency market followed by USD 40 million each day on 19 March and 25 March. As of this week, the USD to GEL exchange rate is around 3.18.

How the USD to GEL Exchange Rate is Determined

Technically, people and business receive income both in national and foreign currencies (remittances, export and tourism) and address commercial banks for converting. For instance, an exporter company asks a bank to convert export-earned USD into GEL to pay salaries or taxes and, therefore, increases USD supply to the market. On the other hand, an importer company gets revenues in GEL and also asks a bank to convert GEL in a company’s account into USD and, therefore, increases the demand on USD. Thousands of Georgian nationals make similar transactions every day. As a result, the separate decisions of citizens and businesses on converting currency are being accumulated in commercial banks.[1] The commercial banks either have a surplus of USD or experience a shortage or sell foreign currency to each other at a certain price. The interbank foreign exchange market is organised within the Bloomberg trading system which allows trade transactions in different currencies. The average weighted currency trade eventually determines the GEL exchange rate. In sum, the GEL exchange rate is determined by each citizen and business entity through the banks. When people and business start panic buying of USD (even when they do not need it), banks are forced to fill their foreign currency reserves and are ready to pay more GEL for one USD. As a result, USD appreciates and the GEL exchange rate goes down in this case.

As mentioned previously, people and businesses determine USD supply and demand at a currency market. In turn, their desire to convert the currency is stipulated by the sources of USD inflow and outflow. When a country has large volumes of a foreign exchange inflow (people and businesses have a large amount of USD to convert) GEL appreciates and, vice versa, it depreciates in the case of large USD outflows (peoples and business experience the need for USD). The main sources of foreign exchange inflow in Georgia are as follows: export – export includes both the export of goods and services as well as tourism revenues that constitute a part of service exports, foreign direct investments – foreign exchange inflows which foreigners invest in Georgia’s resident organisations. These funds are later converted into GEL to satisfy the organisation’s ongoing needs and business provides USD to the market in this manner; foreign debt – both government and businesses can take foreign debt which are later converted into GEL and used to purchase a needed service or goods. In this case, too, the USD supply to the market does increase, remittances – money earned by Georgian nationals abroad which they send to their families. Remittances are also an important source of foreign exchange inflows to Georgia since people convert remittances to GEL in order to meet their current needs which increases the foreign exchange supply to the market.

In regard to the source of foreign exchange (USD) outflow, it is mostly money on imports. When a foreign commodity enters a country’s market, its value is paid in a foreign currency. To this end, an importer buys USD at a local market and transfers it abroad. As a result, the demand on USD rises. USD outflow is also related to foreign debt service. In particular, whilst taking a new debt stipulates USD inflow into a country, the government and business buy USD in Georgia and send it abroad to pay for the underlying amount of the debt and the accrued interest rate which also increases the demand on USD.

On top of the aforementioned factors, expectations also affect currency supply and demand. In particular, under standard circumstances, a person/entity buys and sells USD when necessary. Given the ongoing processes, the expectation that USD will appreciate tomorrow pushes people to start a massive buying of USD today and, therefore, increase the demand on USD. As a result, the GEL exchange rate decreases (depreciates) the same day because of expectations.

The Georgian public and the political spectrum often press the National Bank of Georgia to prevent GEL depreciation. In fact, the National Bank of Georgia is unable to keep the exchange rate unchanged for a long period of time. On the other hand, this is not even desirable for the economy. Changes in the GEL exchange rate are the result and reflection of economic processes and bear a self-regulatory effect. To put it simply, by depreciating the exchange rate, the economy treats itself but an artificial halt of a drop in the exchange rate impedes the recovery process. In particular, when GEL depreciates, Georgian exports become cheaper for a foreign country and import to Georgia gets more expensive. As a result, the import volume decreases and the export increases which eradicate a foreign currency supply misbalance and stabilise the GEL exchange rate. In turn, if GEL has to be depreciated because of economic factors (the demand on USD exceeds supply) and the National Bank artificially keeps a strong GEL, export for foreigners will become expensive and import for Georgia will become cheaper. As a result, import will increase and export will decrease which will further increase the misbalance between USD supply and demand. In the long run, pressure to depreciate GEL will further increase. This is a clear example of why the National Bank of Georgia should not artificially keep the GEL exchange rate even if it can afford to do so.

On the other hand, none of the central banks in any country is stable enough to artificially maintain the exchange rate for a long duration because it requires spending their currency reserves on pursuing a tight monetary policy (increasing the refinancing rate). Currency reserves are limited and insufficient to maintain an artificial exchange rate. Simply, currency reserves will one day be depleted. However, this does not mean that central banks should have a hands-off approach. By the timely selling of currency reserves (or purchasing foreign exchange), central banks ensure a decrease of fluctuation amplitude. Central banks use currency interventions to calm panic activity, neutralise the effect of some large transactions and, thereby, avoid an unpredictable fluctuation of the exchange rate as well as reduce currency risks for market stakeholders by stabilising the national currency. This is the best that central banks can do. If a currency exchange depreciates to a level when an increase in prices becomes inevitable, central banks usually have to adopt a tighter monetary policy; in particular, increasing the refinancing rate which allows keeping the level of prices but usually sacrificing the economic growth rate.

The Impact of the Pandemic on the GEL Exchange Rate

The current world pandemic has affected the Georgian currency market simultaneously in several directions and all sources of the aforementioned USD inflow were also affected. First and foremost, tourist activity has ceased all over the world. As a result, Georgia completely lost these foreign exchange flows which it received or could receive from tourism revenues. Therefore, the currency market lost this portion of foreign exchange which it anticipated receiving from service export (tourism).

The world economy took a huge blow from the pandemic and incomes dropped globally. Therefore, incomes which Georgian nationals earn abroad also decreased (for instance, almost all activity in Italy, which is an important source of remittances for Georgia, has been banned). Remittances are the second most important source whose decrease caused a drop in USD supply to Georgia.

In such unstable circumstances in which the world economy currently finds itself, investors are moving into a standby regime. According to the International Monetary Fund’s data, investors have already withdrawn USD 83 billion from developing markets (Georgia, too, is a developing market) which is the highest figure of capital outflow registered thus far. Therefore, the situation would not be propitious in terms of investments as well. Georgia has been experiencing difficulties in attracting investments prior to the crisis. In particular, the volume of foreign direct investments in 2019 almost did not increase (0.2%) as compared to the previous year and 2018-2019’s FDI figure was higher as compared to 2013’s figure only.

Export, which is another source of foreign currency, is negatively affected by the reduced foreign demand[2] from trade partners. Therefore, in light of the reduced trade turnover which is characteristic to a crisis, the export volume will also decrease as a result of both a natural volume reduction and a drop in the prices of goods. On the other hand, Georgia’s demand on import also declines which in turn impedes the outflow of foreign currency and serves as an anchor of the GEL exchange rate (albeit, a seemingly insufficient one).

On top of these fundamental factors, it is assumed in any case that market panic also played an important role in the depreciation of the GEL exchange rate. The data, which could flatly confirm the role of expectations, are not available. However, empirical observations and/or reflections of people possessing operational information confirm the effect of such a factor.

It was the joint impact of the aforementioned factors which stipulated the depreciation of the GEL exchange rate. Simultaneously, with the disappearance of the effect of expectations, the GEL exchange rate decreased from the peak to a short-term equilibrium. Currently, the role of expectations and panic has somehow been eliminated although, unfortunately, improvements of other fundamental factors are not in sight. Remittances and investments, let alone tourism revenues, will not return to pre-crisis figures in the nearest future. Therefore, in this situation, the attraction of foreign assistance/obligations can be considered as an important determinant of the currency stability. It was reported that the International Monetary Fund will allocate additional funding although the exact amount is currently unknown. It was also confirmed that Georgia will receive additional foreign financial resources from the European Union and the World Bank in the amount of EUR 183 million and EUR 45 million, respectively. Naturally, these sums are insufficient and the government’s efforts are important to take new foreign obligations as well as to restructure the old ones which are due at the present moment. On the one hand, this will increase foreign exchange inflows and, on the other hand, will postpone foreign exchange outflow.

In a similar situation, foreign exchange flows from large infrastructural projects (Anaklia deep-water seaport, large HPPs) which have been halted (in the best case) would have had a significant stabilising effect. In an already different economic reality, taking strong commitments to complete these projects and using the very first opportunity in this direction will bring a substantial positive effect to the economy in a post-crisis period.

[1] For simplicity’s sake, microfinance organisations and other financial institutions are not included.

[2] Foreign demand is the demand of foreign nationals on goods produced in Georgia.