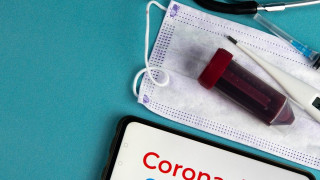 Are Wide-Scale Diagnoses and Rapid Tests a Panacea?

The leader of the New Georgia party, Giorgi Vashadze, stated: “The number one problem in the country still remains diagnoses, rapid diagnoses and rapid testing. International indicators demonstrate that we are nearly at the bottom all around the world in terms of the number of diagnoses and tests. Armenia, Azerbaijani, Russia, Turkey, etc., are ahead of us.”

Mass testing can be considered as the main tool for fighting the pandemic. Testing allows a timely identification of infected individuals as well as their timely isolation and treatment. The World Health Organisation (WHO), many health professionals and number of countries agree that without mass examinations, the so-called aggressive testing, it is impossible to contain the pandemic. Of importance is South Korea’s example which succeeded to control the epidemic through mass testing.

Of note is that globally Georgia is considered as a success story in fighting the novel coronavirus. However, it gives no ground to relax since the country has already moved into the internal transmission phase (meaning when source of the infection remains unknown) with the virus’s peak looming. According to the Worldometer’s data, Georgia’s tests per million people figure is 820 which is one of the lowest figures worldwide.

Table 1: Number of Tests Per One Million People – In Highly Affected Countries and Post-Soviet Nations 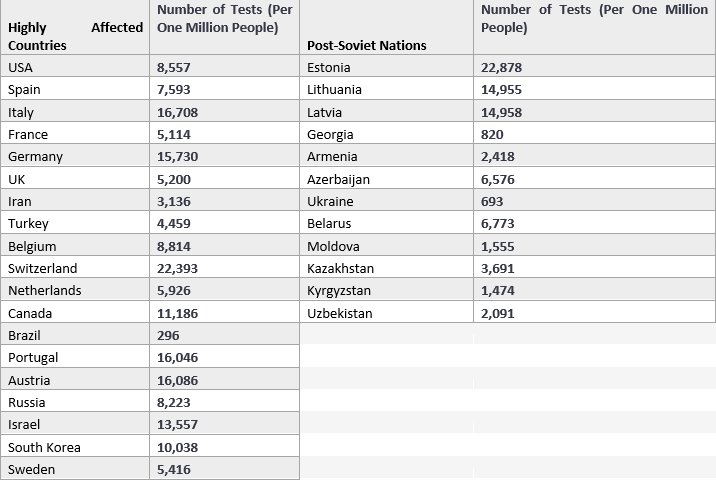 COVID-19 is diagnosed through laboratory research - the polymerase chain reaction method or/and rapid tests for detecting antigens and antibodies. Georgia largely uses the PCR method for the diagnosis of COVID-19.

The Director of the National Centre for Disease Control and Public Health (NCDC), Amiran Gamkrelidze, stated: “The comparative analysis that Georgia lags behind other countries in terms of test numbers is not right. These data are not based on PCR technology; that is, laboratory diagnostics, which means that these are people tested mostly with the rapid method, by antigen or more frequently by antibody tests.” Mr Gamkrelidze also added: “The most important thing for us is to make sure there is not a person in the country who needs testing according to our algorithm and he is not tested. This has not been the case thus far.”

According to the new testing algorithm what was approved on 1 April 2020, rapid antibody and antigen tests have already been put into use. However, the PCR diagnosis still remains as a principal standard.

The relevant test groups defined by the new algorithm are as follows:

• Individuals who were in self-isolation or government-provided quarantine zones, who had contact with an infected persons and started to show COVID-19 clinical symptoms.

• Patients with symptoms from high-risk zones.

• Individuals from a cluster of patients with specific symptoms.

• Patients in hospitals and dispensaries who show respiratory symptoms characteristic to a COVID-19 infection.

In addition, high-risk groups for testing were also defined. These groups are as follows: healthcare workers of hospitals with a greater patient load, employees of penitentiary facilities, 24/7 specialised elderly care facilities, in-patient psychiatric hospitals, military service members and clergy, including people in monasteries.

As early as 17 March 2020, the Minister of Health of Georgia, Ekaterine Tikaradze, stated: “By the end of the week, we will able to start aggressively testing the population.” Later, on 23 March, Ms Tikaradze stated that Georgia was going to receive the rapid test kits on 24 March. Of note is that on 24 March Georgia received 1,000 so-called accelerated PCR test from China as a gift and a contract with a Chinese company for the acquisition of 215,000 rapid test kits was cancelled on 27 March due to dubious quality of the tests.

With the aim of preventing the spread of the virus, Georgia declared a state of emergency on 21 March 2020. On 22 March, a coronavirus internal transmission case was confirmed in the Marneuli municipality and followed by the imposition of a strict lockdown on the Marneuli and Bolnisi municipalities. On 28 March, the NCDC officially stated that the internal transmission of the virus had started in the country. At that time, there were no rapid tests in the country and only people with a travel history were being tested. The Prime Minister, Giorgi Gakharia, stated from time to time that rapid testing was not a panacea but a matter for political speculations only.

As mentioned previously, the new testing algorithm was approved on 1 April 2020 and Georgia gradually started to use the rapid tests. On 14 April, the Director of the NCDC, Amiran Gamkrelidze, stated: “Active testing and early identification are one of the important tools in fighting COVID-19. The best examples are South Korea and Germany and they make diagnoses through PCR technology-based tests. The algorithm has already been changed in Georgia. Both PCR and rapid test reserves are stocked up on a daily basis.” As clarified by Mr Gamkrelidze, there are plans to expand testing.

Notwithstanding the methods used for the diagnoses, it is a fact that Georgia significantly lags behind other countries of the world in terms of the number of tested people. Of additional note also is that at this stage, too, the testing algorithm still does not envision a universal testing of the population.