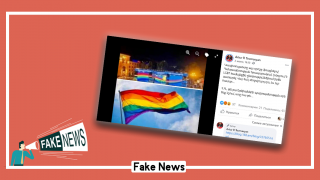 False information: an LGBT flag has been displayed in the Republic Square on the 1st of June

Disinformation: an LGBT flag has been displayed in the Republic Square on the 1st of June

Arthur Tovmasyan: a supporter of I’m Have Honor Alliance wrote on his Facebook page on the 2nd of June, that on Children’s Day, during an organized event, there has been an LGBT flag displayed in the Republic Square. According to him, the PM of Armenia was behind this decision, with an intention of gaining the support of the LGBT community.

This information is false because it is not the LGBT flag that is displayed on the photos of the post but rather an animated rainbow.

How did the news spread and why is it fake?

Arthur Tovmasyan has written in his post –“By whirling this flag in the Republic Square, the capitulator [the author is referring to Nikol Pashinyan -Ed.] was asking the LGBT community to support him during the elections. Oh, Armenian nation, how far have you come!”

Attached to the post, Tovmasyan added two photos: one from the event on the 1st of June and another – a picture of the LGBT flag. This parallel creates an impression that during a concert dedicated to children, there was actually a flag of the LGBT community displayed.

Tovmasyan’s post has also appeared on a number of news platforms – 168.am, hayeli.am, 7or.am, livenews.am, top-news and others, as well as on Facebook groups.

The photos from the event, however, show that it was not the LGBT community flag displayed on the screens of the Republic Square but rather an animated rainbow.

The author of this animation is the organization that coordinated the event: “Buro” ltd. Meri Arakelyan, the head of this organization, said in a conversation with us that even the number of colors on their rainbow does not match with that of the LGBT flag. The animated rainbow has seven colors, while the LGBT community flag – only six.

This is not the first case when Arthur Tovmasyan is accusing the current government of conducting LGBT propaganda. In 2019, for example, Tovmasyan was predicting that “a gay parade” too would soon be held in Yerevan as Pashinyan’s government had already arranged a reception for the transgenders and sponsored a movie about them.