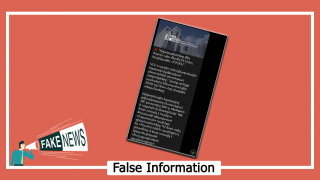 False Information: Pashinyan Received Only 4 Votes in the Online Voting

False Information: Pashinyan Received Only 4 Votes in the Online Voting

On June 20 – the day of the parliamentary snap elections, the Telegram channel Mediaport wrote that the Civil Contract Party led by the Prime Minister Nikol Pashinyan had received only four votes in the online voting. “The diplomats have altogether turned down Nikol Pashinyan”, the channel noted.

Mediaport cited unnamed sources and presented no evidence. Despite this, online media platforms went on to share the news.

The information was not correct. Mediaport had presented false data regarding the number of people that took part in the online voting and the election results.

First, the channel declared that 284 out of the 287 voters took part in the online voting.

Second, they declared that 168 votes went to the Armenia Alliance led by Robert Kocharyan, 112 to the I Have Honor Alliance, and only 4 to the Civil Contract Party.

Only a specific group of people, who are RA diplomats abroad, servicemen outside the country on long trips or training, and external employee representatives of legal entities registered in Armenia have the right to vote electronically.

According to the Central Electoral Commission (CEC), this year, the number of such electors was 650. Of them, 500 participated in the parliamentary snap elections, while 45 ballots were declared invalid.

Therefore, the first claim of Mediaport, stating that 284 out of 287 online electors took part in the votes, was false.

Meadiaport cited an unnamed source, according to which the most – 168 votes went to the Armenia Alliance, while the ruling Civil Contract Party received only 4 votes.

The channel asserted that the CEC would officially publish the online voting results after 20:00, when the polling stations would be closed. Indeed, on the evening of June 20, the results were announced. They were, however, entirely different from the information shared by the Telegram channel.

CEC declared that the ruling Civil Contract Party received 163 votes – not four like Mediaport had reported. The I Have Honor Alliance’s votes amounted to 14 (not 112), while the Armenia Alliance received 135 votes (not 168).

Therefore, the second claim of Mediaport was false as well; the results that the channel was sharing did not match the online voting outcomes published by the CEC.